Bosson Banking On Something Special From Shark

Jockey Opie Bosson has made no secret that he believes Te Akau Shark is something special and he says he’ll need to be if he’s to round up a crack field in Saturday’s Group 1 $600,000 TAB Chipping Norton Stakes (1600m) at Randwick. 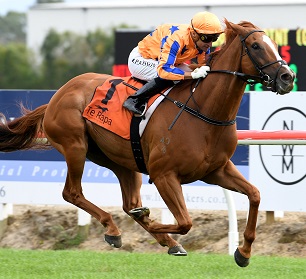 The popular chestnut faces an all too familiar task having drawn a double figure marble – it’s his fourth consecutive wide barrier in Australia and the sixth time in his last eight starts he’s jumped from nearer the outside of the field.

But Jamie Richards' five-year-old arrives in Sydney as a Group 1 winner and placegetter in a Cox Plate since his first visit and Bosson takes plenty of confidence in that.

“I’ve always rated the Shark all the way through and he just keeps stepping up,’’ Bosson said.

“It takes a decent horse to come over to Australia and be competitive. At least we know he is up to that class and he will be competitive against those good horses.

“It’s a pretty strong race. If he wins this we won’t be afraid to take on anything."

Bosson is resigned to having to concede a head start in the Chipping Norton but if he can give Te Akau Shark, the $2.60 TAB favourite on Thursday, the right run has no doubts he’s good enough.

“A good gate makes things a whole lot easier though he’s not a natural speed type of horse,’’ he said.

“He does want to race midfield or maybe a touch closer but from those wide gates we just have to go back and try to get in.

“I’ll play it by ear, how we jump away and how the race pans out. We just don’t want to be stuck wide without cover, we want to give him the softest run we can.’’

Bosson has a blueprint to follow from an outside gate in over the Randwick mile via Te Akau Shark’s narrow defeat to Kolding in the Group 1 Epsom Handicap in the spring.

He drew barrier 15 on that day and James McDonald had the horse in the three wide line in the second half of the field before unleashing his sprint to just miss.

Of course he followed that with a brave third in the Cox Plate, again off the outside alley, before finally getting his Group 1 when he returned over 1400m at Te Rapa on February 8.

Bosson said that win was a super performance in a race he was put right out of his comfort zone by the runner-up skipping away before the turn.

“The leader got a bit of a break on us and left us a little flat footed but as soon as we straightened up I knew I had him in my sights,’’ he said.

“In the end it was quite an easy win. He seems a bit stronger, but he’s a pretty unassuming type of horse. He’s come back a more grown up type of horse.’’

The champion New Zealand jockey is eyeing a Group 1 double at Randwick and, like with Te Akau Shark, is adamant Probabeel is a force to be reckoned with in the $500,000 Heineken 3 Surround Stakes (1400m).

In the spring Probabeel wasn’t able to get the better of Surround favourite Funstar in their clashes in the Furious and Flight Stakes but since then she’s posted two easy wins in New Zealand, including the three-year-old Karaka Million, and arrives with the tail right up.

“She’s a very good filly and she has come back a lot stronger,’’ Bosson said.

“Her trial last week was pretty good, just looking at it, and I think she is going the right way.’’

Probabeel, $5 with TAB, had a lot more luck with the barrier draw than Te Akau Shark and Bosson said it will give his filly every chance to get the better of a very good bunch of fillies.

“She races midfield anyway but at least if she jumps away okay we might be a couple of spots closer and get as cosy a run as possible,’’ he said.

“It’d be nice if there was a good speed on, if we can sit midfield one off and get into the clear at the right time that would be perfect.’’