He was meant to be one of the stars of the autumn and jockey Glen Boss is hoping that spring will see Golden Eagle hero Kolding recapture his brilliant best. 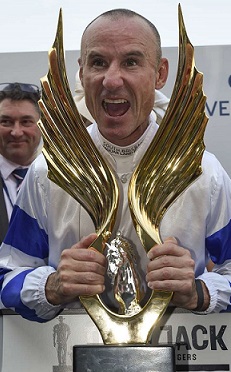 Glen Boss is hopeful Kolding can return to the form that won him the Golden Eagle (Pic: Bradley).

But Boss has thrown out a warning that Kolding should be judged on the performance and not the result first-up in the Group 2 $200,000 Iron Jack Missile Stakes (1200m) at Rosehill on Saturday.

Kolding took all before him after trainer Chris Waller recommended he be gelded winning seven of his eight starts after the operation including the Group 1 Epsom Handicap and inaugural $7.5m Golden Eagle.

But he lost his way when he returned in 2020, failing to run a place in five starts, so as far as Boss is concerned the jury is out but he’s hopeful he can get back on his perch as one of the nation’s most exciting gallopers.

“I don’t think he came up particularly well in the autumn,’’ Boss said.

“I have a massive soft spot for this horse and I hope he comes back.

“After the Golden Eagle I thought this was a horse that would make the step because he has a dynamic turn of speed, that’s what you look for in a weight-for-age horse.

“He seemed to possess it this time last year, so I’m hoping he can get back because if he does he’s a serious racehorse.”

Boss is a realistic marker when he comes to assessing horses he’s had plenty to do with and he’s of the view that perhaps Kolding, the winner of $5.7m in prizemoney, didn’t make the step from handicap and restricted racing immediately.

He carried 50.5kg to win the Epsom and the Golden Eagle, as strong as it was, is for four-year-olds only at set weights.

“The Golden Eagle was a hot race but a restricted race, and after winning that there was nowhere to hide,’’ he said.

“And you won’t get a guide off him first-up, he runs okay first-up but he’s not super.’’

To date Kolding’s only first-up win was a maiden at Canterbury in January last year when he was still a colt.

His only heavy track exposure came in the Doncaster Mile and Queen Elizabeth Stakes, when clearly racing below his best, but he was only beaten 2.6 lengths in the Doncaster with 57.5kg so it’s hard to argue he doesn’t handle the ground.

Boss trialled the five-year-old, $18 with TAB, on a heavy Kensington track at the end of July and noted a change in demeanour on that occasion. Whether it’s a permanent change remains to be seen.

“He’s trialled better for me in the past. I’m just waiting to see what he does race day,’’ he said.

“This time last year everything he did was with a lot of purpose, the other day in his trial he was half relaxed and switched off. It’s a bit of a look and see. It’ll be interesting to see how he runs.

“And if the rain comes we might get a really soft track and that adds another dimension.’’

Kolding runs fifth in a trial at Kensington on July 31

Boss can’t wait to partner Oaks bound filly Montefilia ($6) if she steps out in the Sky Racing Active Handicap (1500m) on Saturday after her scratching from Randwick last weekend.

Trainer David Payne elected to withdraw the filly early in the day as he felt she wouldn’t have fired in the very heavy ground and Boss feels that was the right move.

“I’m tipping it would have gutted her. She’s not a powerful filly, she’s a really fine filly and I think he did the right thing for her sake,’’ he said.

“She’s a really nice staying filly. She ran really well for me behind Holyfield (in March), she was out on her feet with a furlong to go but she kept rallying and found the line.’’

We asked Boss if there’s a horse he’d like to partner in the upcoming spring carnival which one would it be, he said there are several but would very much like to be pulling on the Godolphin blue perhaps with a view of defending his TAB Everest crown.

“Bivouac is a horse I’d really like to be on in the spring,’’ he said.

“What he did for me in the Newmarket third-up last preparation was out of this world.

“I’m confident if he can recapture that rating he will be really hard to beat in any sprint race this spring.”