He knows everything has to go right but jockey Tim Clark isn’t giving up hope that Just Thinkin’ can turn the tables on hot favourite Shadow Hero in Saturday’s Group 1 feature at Randwick. 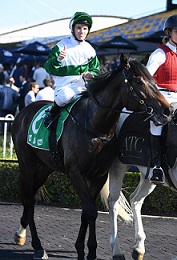 The great unknown of the track condition aside, Clark is looking to the addition of blinkers in the Group 1 $1m Moet & Chandon Spring Champion Stakes (2000m) and a more favourably run race to work in his favour.

When they met in the Gloaming Stakes two weeks ago Shadow Hero swept by Just Thinkin’, who endured a tough run on speed, and finished the race 4.5 lengths ahead so there is a bit of ground to make up.

“He dictated the previous start and they couldn’t run him down but a few interesting tactics brought my bloke undone and set it up for a backmarker,’’ Clark said.

“I thought he did a good job to still give a bit of a kick and hit the front near the furlong.

“He has a bit of ground to make up on the winner, whether he can turn that margin around we’ll have to wait and see, but I’m confident he’ll finish closer to Shadow Hero than he did last start.’’

Clark worked the Gai Waterhouse/Adrian Bott trained gelding in the blinkers on Tuesday and says if they have the impact he hopes then Just Thinkin’ will be a lot more effective.

That’s regardless of whether he leads or has to ride the pace once again.

“He wasn’t comfortable outside the leader and when it quickened before the turn he didn’t know how to chase after him,’’ he said.

“If he’s in that position again with the blinkers on I think he will be able to travel up a lot better. I won’t have to get after him and help him.

“Hopefully they can get a couple more lengths out of him.’’

Just Thinkin’ started $3.20 in the Gloaming but after finishing fourth there he’s a $7.50 chance with TAB in the Group 1.

Clark admits he’s not sure whether Just Thinkin’ will relish rain affected ground but is positive based on the limited information he has.

The gelding is a half-brother to both Thinkin’ Big and Stampede who are heavy track winners and the former ran third in the Spring Champion last year on a soft 7.

“He has worked on a few wettish tracks and he has always worked well,’’ Clark said.

“On his work he will handle it but you never know until raceday and under that pressure.

“There’s a few in the race in the same situation so it’ll add an interesting element if it gets quite wet. They are only three-year-olds going to 2000m for the first time then you throw in a wet track it’s a different scenario.’’

Clark also rode his Silver Eagle (1300m) mount Mizzy at trackwork on Tuesday and said she feels a stronger horse this preparation and that’s refelected in her form.

The four-year-old has won all three starts this preparation the latest being the Group 2 Golden Pendant (1400m) two weeks ago.