TAB is predicting the Winx-happy huge punters who invested a fortune on the superstar mare to win first-up will return with even bigger bets on her in the TAB Chipping Norton Stakes at Randwick on Saturday.

The volume of bets on Winx to win The Star Apollo Stakes over 1400m first-up at Randwick on February 16 was extraordinary considering her very short quote and they included the equal-biggest bet TAB has ever taken on a race.

One massive punter didn’t even wait for the final field to be declared for the Chipping Norton before wading in on Winx and placing a bet of $106,000 at $1.10 on the all-in market. It would be Winx’s 31st win in a row. 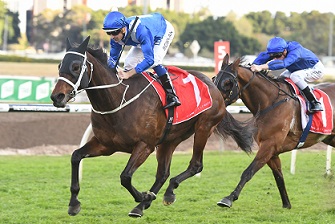 “Judging by the bets on her in the Apollo and the $106,000 bet all-in on her to win the Chipping Norton, this could be the biggest turnover weekend we’ve ever had on Winx,” TAB’s Andrew Georgiou said.

“The big punters were really keen to back her first-up, which is a bit unusual. Normally we would see a few big bets, which indicates some want to wait and see how she has come back to the races.

“But last start in the Apollo was different because they really splashed out – they didn’t want to wait this time.

“She was as popular as ever with punters and won brilliantly, so this week I’d be shocked if we didn’t see at least a similar volume and probably more.”

The ante has only been upped from there and those two bets began a run of 19 six-figure bets at fixed odds in races Winx has won as her incredible winning streak has stretched out to 30 races.

As Winx’s price has dwindled due to her incredible dominance, the amounts big punters have been prepared to bet on her have simply gone up.

The quest for better odds by being prepared to back Winx to win multiple races saw one punter place $60,000 at $2.20 on her to stretch her streak to at least 33 straight before her farewell campaign began.

All things being well, Winx is expected to have two more runs after the Chipping Norton before being retired.