Berry's Taking Brutal Job Ahead In His Stride

There’s nothing popular jockey Tommy Berry can do about the fact his headline rides Brutal and Pierata will jump from outside stalls in their respective feature races at Rosehill on Saturday. 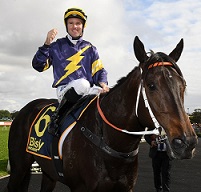 Most trainers will tell you it’s the jockey’s job to worry about barriers but Berry refuses to be psyched out as he attempts to claim the $7.5m Iron Jack Golden Eagle (1500m) on second favourite Brutal and the $1m Redzel Stakes (1300m) on favourite Pierata.

“In any situation you've got to find positives and this is a perfect example,’’ Berry said.

Brutal is an apt word to describe the task facing the Doncaster winner and it’s that win that gives Berry confidence it’s a job he can get done.

“It's not a great gate, a horse like him you look for positives and he drew 18 to go and win the Doncaster,’’ Berry said.

“He's a horse that enjoys a bit of room in his races. Last start we got bustled in behind them and wanted to get pulling, I've always thought he’s a better horse outside horses and we are going to get that opportunity.

“I'd rather draw where I have than draw one. It's not the end of the world and I think he still deserves to be favourite.’’

Brutal was deposed by Arcadia Queen as the fancied elect after the barrier draw and on Wednesday was sharing TAB’s $5 line with Epsom winner Kolding.

In keeping with that positive outlook, Berry says drawing directly outside one of the more likely leaders in the Golden Eagle is a plus for Brutal who he regards as the best horse in the race.

“Sunlight has drawn inside us and she is going to give us every chance to come across with her,’’ he said.

“She has plenty of speed and is probably the quickest horse in the race.

“He was always going to benefit for that second-up run and I believe he has improved through his work during the week.

“Everyone knows the Hawkes’ are very good at aiming a horse for a race and it usually pays off for them.’’

Barrier one did Berry no favours on Pierata in the TAB Everest but he was full of praise for the five-year-old’s effort to run fifth behind Yes Yes Yes.

The $1m Redzel Stakes (1300m) will each year be renamed after the winner of the previous year’s Everest and Pierata and Everest third placegetter Trekking are coming through that race.

“I don't think you can take anything away from him in the Everest,’’ Berry said.

“He only got out late and he ran very well, he wasn't suited by the inside draw and we were just hoping we'd get luck from there and we didn't.’’

Pierata runs fifth in the TAB Everest on October 19

Punter’s Intelligence sectional data clocked Pierata’s last 600m in the TAB Everest at 33 seconds but he was preparing to unleash something with a race best 10.73 from the 600m-400m before being cramped for room on the fence.

Pierata, $2.70 favourite in the Redzel, showed he’s at the top of his game this spring running dazzling sectionals in his previous two starts, including his win in The Shorts, and Berry is adamant there’s plenty in the tank for Saturday.

“He gets to a distance he prefers, he's had three runs under his belt and he's really thrived since that last run,’’ he said.

“He’s going into another grand final without having a tough run into what we thought was going to be his grand final.

“He's the best horse in the race and if he get a clear run, unlike last start, he will be very hard to beat.’’