From Libertini to Exceedance.

It’s been quite a seven days for jockey Tommy Berry and the comparisons are going to be irresistible after Exceedance confirmed his star status with a booming Group 3 Sky Racing Active San Domenico Stakes (1100m) win at Rosehill on Saturday.

The Team Hawkes-trained colt ticked the wet track box, and assumed Golden Rose favouritism at $4.50 with TAB, and Berry was left to ponder the exciting spring ahead. 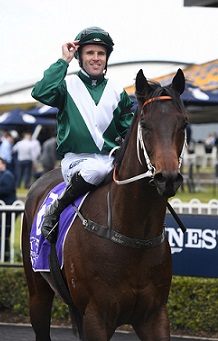 “This bloke - I’m just full of praise for him.”

Then the somewhat unfair question – who’s better, Libertini or Exceedance?

“Not sure yet, they’ve only had one run each … settle down,” was his reply.

Berry settled Exceedance near the rear in the small field on the fence and once he was pulled in the clear let down with the turn of foot we’ve come to expect – but that both Berry and Michael Hawkes couldn’t be sure he could produce on the heavy ground.

He swept past the favourite Bivouac who just held early leader Anaheed to run second. Royal Popcorn, the maiden who’d attracted plenty of attention for his inclusion finished last of the five beaten 13 lengths.

Hawkes said plenty of thought went into deciding whether Exceedance would take his place in the San Domenico and the conclusion was it was better to answer the wet track question now.

“We really had to run to know because if we run in two weeks and find a wet track you’re in the same boat,’’ Hawkes said.

“Once he let down he just gobbled them up and made it look too easy.

“It’s all just part of the plan, it was all about whether he got through the wet ground or not.’’

The Hawkes training partnership has now won three of the last six San Domenicos following Nostradamus (2014) and Star Turn (2016) but Exceedance promises to be the best of them.

He said Berry rode Exceedance with superb confidence and exactly how the stable likes such horses handled.

“A lot of people they get to the top of the straight say let’s go and push the button,’’ he said.

“But you have to get these horses through their rhythm and what enabled him to hit the line strongly was doing that.

“Tommy knows the horse that’s why I said pre race it’s not about anything else it’s about you. Just ride him like the best horse – you’re on the best horse.’’

Berry wasn’t sure before the race whether Exceedance would stretch his brilliance out beyond a sprint trip but the San Domenico win, even though it was only 1100m, has changed that.

“Horses that get back and sprint as well as him, sometimes you get them to the mile and they don’t run it out,’’ he said.

“He feels like he’ll run every bit of a mile out - we’ll see if we get him there. I’m sure that the team he’s with he’ll have every opportunity.”

Odds-on favourite Bivouac was left with no answer to Exceedance and Godolphin rep Darren Beadman wasn’t offering any excuses.

His Golden Rose price doubled, to $11 which seems an over reaction on such testing ground.

“He was just beaten by a better horse on the day,’’ Beadman said.

“He wasn’t as effective on that ground but he had his chance to win.’’

What the beaten jockeys had to say:

Hugh Bowman (Bivouac): “Certainly wasn’t as effective on rain-affected winter ground but take nothing away from the winner who was too good on the day.”

Kathy O'Hara (Royal Popcorn): “He went much better than I thought he would. He stuck on not too bad. Just needs a 1400m maiden on a wet track.”

All the results and replays for Saturday's Rosehill Gardens meeting