Jockey Tommy Berry is adamant exciting prospect Master Of Wine can develop into the weight-for-age star we’ve been waiting for. 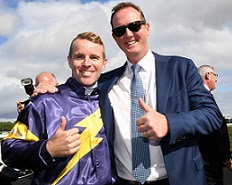 It’s a big rap for a horse that is still coming through the grades but he’s widely expected to stamp that promise by adding the Group 3 $350,000 Sky High Stakes (2000m) to his record at Rosehill on Saturday.

He’s the $2.60 favourite with TAB, as at Thursday, and taking the scalp of another talented stayer in Mustajeer will suggest he is a star on the rise.

“For any horse to win by a margin is always exciting, especially stayers, and he’s won by a margin at his last three starts,’’ Berry said.

“We need a good weight-for-age horse at the moment and he could be the one.

“He’s heading in the right direction and being trained by the Hawkes’ he has the right people on his side.’’

A win on Saturday would surely see Master Of Wine wrest favouritism from Avilius, who he shares top spot with at $6, for the Group 1 $1.5m Kia Tancred Stakes (2400m), at weight-for-age, on March 28.

The task for Master Of Wine, despite his favouritism, is to make the leap from 1400m first-up to the 2000m on Saturday but if there is any doubt Berry defers to the talents of the Hawkes stable.

Berry said the most important factor is how the gelding settles in the run.

“I don’t think it will worry him too much, he just has to relax well enough to get the trip,’’ he said.

“Only being second up with a few weeks between runs he will be a touch on the fresh side. He can race keenly at times so providing he relaxes in the run, and hopefully there is a bit of speed on it will assist him, I don’t think it will affect him.’’

It was a dynamic return by the imported five-year-old and he showed remarkable sharpness for a horse first-up from a win over 2400m to clock the fastest last 200m (11.71, Punter's Intelligence) in a 1400m event at Rosehill on February 22.

“He surprised me over 1400m, how close he settled in the run and his turn of foot,’’ Berry said.

“That just shows how much he’s matured as a horse, he’s been given the time he needed and has come back a much better animal. It’s just been a bit of patience from the Hawkes team and they are reaping the rewards now.’’

Improvement in the Rosehill track is vital, according to Berry, for Rock to press his claims for next month’s Group 1 $3m The Star Doncaster Mile (1600m).

Rock is racing for a Doncaster exemption in the Group 2 $200,000 Hyland Race Colours Ajax Stakes (1500m) after a first-up third behind Quackerjack and Vegadaze, opponents again on Saturday, at Randwick two weeks ago.

Master Of Wine wins at Rosehill on February 22

“He only had two soft trials and the second of them was very easy so he will take benefit out of it fitness wise and the step up to 1500m will assist him.

“Hopefully the track dries out for him, if he hits a nice surface he will make his presence felt.

“He’s a borderline Group 1 horse and if he finds the right one, and things go his way, he is a chance of winning a big one.’’

Rock, also trained by the Hawkes team, was $5.50 with TAB on Thursday.

Berry’s Group 1 ride on Saturday is Sylvia’s Mother in the $600,000 Coolmore Classic (1500m), a mare he’s always had a lofty opinion of, and she returns to Sydney with successive Group 3 wins in Melbourne this time in.