A week after a close call on boom filly Libertini, jockey Tommy Berry isn’t taking anything for granted as he prepares to pilot gun colt Exceedance at Rosehill on Saturday.

Golden Rose favouritism goes on the line in the Group 2 $200,000 Sydney Markets Run To The Rose (1200m) and all eyes, just as they were on Libertini in the Furious a week ago, are on Exceedance. 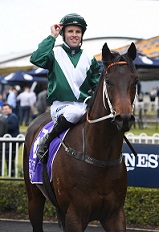 Berry said the two three-year-olds had very different first-up runs and while Exceedance is also a short priced favourite he still has to prove himself as the best of the boys.

“She was in a high speed race, they ran along at a good speed and she ran good time,’’ Berry said.

“In Exceedance’s first-up run they went steady to the turn and it was a sprint home, and that was on a heavy track.

“I wouldn’t say he’s the best colt going around yet, but back on a dry track there won’t be any excuses.

“If he happens to win on the weekend he’d cement his favouritism for the Golden Rose and rightly so.’’

Exceedance was the $2.20 Run To The Rose elect with TAB on Friday and he stands atop the Golden Rose market at $4 ahead of his two main rivals this weekend in Yes Yes Yes and Bivouac at $8.

The Team Hawkes-trained colt sizzled despite striking heavy ground for the first time in the San Domenico, with Punter’s Intelligence sectional data clocking him at a best of the day 33.64 for his last 600m and 11.23 his final 200m.

Berry said while Exceedance wasn’t completely happy in the heavy ground he’s passed that test and as he goes beyond 1100m for the first time there are new challenges ahead.

“He wasn’t overly comfortable, his wheels spun a bit but he was able to get the job done and now he has to tick the 1200m box,’’ he said.

“That should be the least of his worries, he looks like he will eat up the ground. Another thing is can he hold a position in a race?

“They can all be beaten, he can definitely be beaten. He’s got to step up again, it’s a bigger field with more quality.

“It was a bit of a two horse race last start where there’s probably a good four horses in this that will be hard to beat.’’

He says that dictates the four-year-old, the $5 second favourite behind Perth mare Arcadia Queen ($1.85), will likely concede a start again but he’s itching for the day the barrier gods shine on him.

“When you’re asking them to come back at the start all the time they can form a habit and that’s through no fault of his own,’’ he said.

“Every time he goes around I’m praying he draws a gate so I can ride him a little bit closer.

Mizzy broke through for an overdue Group win when she resumed at Randwick last month and Berry sees no reason why she can’t double up in the Group 2 $200,000 Schweppes Sheraco Stakes (1200m).

Everything fell into place for the four-year-old as she took out the Toy Show over 1100m and the in-form jockey concedes luck in running could come into play.

“I was confident she’d get the job done first-up, I’m confident she is going better but she is up against a tougher field,’’ he said.

“She won’t have the favours she had last start, she will probably have to do more work, but she is one of those horses that is tough and never throws in the towel.

“If she wins or she doesn’t I guarantee she won’t get beaten more than a length or so.’’