Trainer Bernie Kelly has been in a race against time to ensure his promising galloper Bobbing gets his chance to qualify for next month’s Provincial Championships.

And if he does finish in the top three in the final qualifier at Wyong on Saturday he’ll be thanking the sponsors, Polytrack, for getting him there. 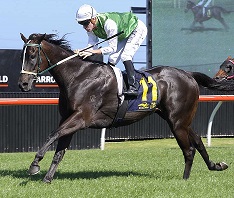 Bobbing, a winner of four of his eight starts, was accepted for the Newcastle Qualifier earlier this month and nominated for the Kembla Grange heat as well but Kelly said he’s been hampered by a minor setback and the weather.

“He was accepted for Newcastle and he just had a few coughs on the morning of the race, which is unusual for him, so I erred on the side of caution,’’ Kelly said.

“I got him scoped, it was a 50-50 call but I elected to scratch thinking we live to fight another day.

“With the wet weather in the meantime I’ve tried to get him to a trial a couple of times and we’ve had no luck.’’

The five-year-old trialled twice in February but it’s been over a month since that second trial.

That’s where Hawkesbury’s Polytrack training surface has been a godsend.

“It’s been an asset considering I haven’t been able to get on the grass,’’ Kelly said.

“Normally you’d be well and truly behind the eight ball but with the Polytrack it’s a great aid.

“Everyone’s trying to get on the grass and it chops out but with the Polytrack it doesn’t seem to matter as much, it’s doing the job at the moment.’’

Bobbing has been in the top section of the betting for the Polytrack Provincial Championships Final (1400m), at Royal Randwick on April 13, since TAB markets opened and is currently a $15 chance.

He hasn’t raced since taking out the Spring Provincial Series Final (1600m) back on December 1.

While Wyong may not seem the ideal track for a horse like he’s unbeaten at the 1350m around the Central Coast circuit of Saturday’s qualifier where he's the $4 favourite.

“He’s no superstar but he goes well and his bloods suggest he is in good order.’’

In his eight starts to date Bobbing has had six different riders and Koby Jennings will be number seven when he’s legged aboard at Wyong.

Bobbing wins at Wyong back in October

Kelly expressed some concern about the forecast for rain on Saturday, even though Bobbing has won three races on soft tracks, but it’s because the horse is first-up.

“You can work them as much as you like but you can’t beat that hard racing,’’ he said.

“I was hoping for a wide draw which he got. He’s going to be out of harm’s way in that respect.

“He’ll be out the back minding his own business for the first half of the race.

“I’d like to think he can switch him on, we’ll probably go around them rather than through them especially if it is a rain affected track.’’

All the fields, form and replays for Saturday's Provincial Championships meeting at Wyong