He’s the king of the Highways and thanks to unassuming grey mare Gracie Belle trainer Matthew Dunn has finally clinched the $400,000 Newhaven Park Country Championships Final (1400m) at Royal Randwick.

The Murwillumbah trainer mastered the art of travelling horses to Sydney to run in the regular Highway races but when it came to the Country Championships his hopes had always been scuppered by wet tracks. 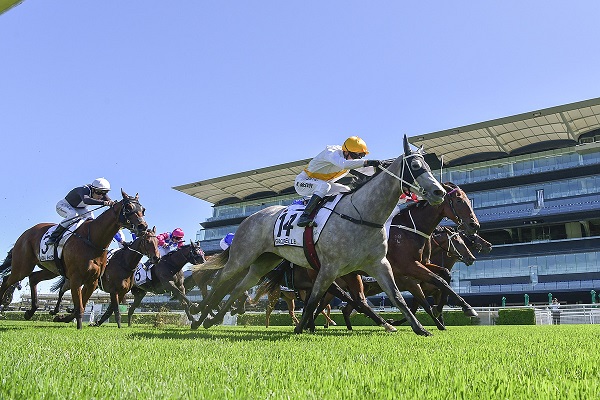 But with a rails hugging ride from champion jockey Kerrin McEvoy, Gracie Belle ($21) put her grey head down on the line to deny Tash Burleigh’s Al Mah Haha ($13) with the Warren Gavenlock-trained Plonka ($15) giving the Northern Rivers first and third.

Dunn said, from his Murwullumbah base, he would have loved to be there with his wife and foreperson Keira, who represented him on track, but it is very satisfying to finally win the race with a horse he says was a little underestimated but was perfectly suited to the conditions.

“We probably have taken the right horses and struck the wrong track,’’ Dunn said.

“This time maybe we didn’t have a horse with quite as good form as our other horses but she found the right surface and that was the difference.

“Her form was pretty good, she had proper Saturday Brisbane form and I’ve always thought that was good enough.’’

As he alluded, it’s fair to say Dunn has qualified better horses than Gracie Belle who ran second behind Plonka in the Northern Rivers Qualifier at Grafton.

Dunn had won the Qualifier in the previous three years and headed to Randwick adamant they had the right horse but left empty handed – he saddled up Perfect Dare, who started favourite and finished 12th, win 2017, Snitz ran fifth in 2018 while La Scopa managed seventh behind Noble Boy last year.

However it was Gracie Belle’s wet track ability that had Dunn quietly confident that 2020 would be his year.

The mare came to him out of the blue last year from North Queensland and she’s caused her share of headaches but Dunn said the way the race unfolded allowed Gracie Belle to produce a career best.

“When she came down she was difficult to ride and hard work, and still is she’s still tough,’’ he said.

“Arriving in Sydney two days out suited her because Keira would find her difficult to work her down there so she only did some swimming. She’s tough to work without ponies.

“The key was the tempo was strong enough to get her to settle. At Grafton when they went slow she pulled and that was the difference.’’

It was Kerrin McEvoy’s first Country Championships win and despite the driving finish he said he was confident a fair way from home that Gracie Belle would be a force.

She settled near the tail of the field early but worked her way through along the inside and while challenged strongly by Al Mah Haha in the closing stages she lifted.

“I was happy over the last 100 yards, admittedly it wasn’t a big margin,’’ McEvoy said.

“At the half way mark she started to travel for me so I was confident of her finishing off well after we got around the corner.

“She’s got here today and enjoyed the ground and that ruled a few of them out. Matt just said leave her alone and have her comfortable and that’s what she did.”

The restrictions placed on racing participants, and the need to keep numbers on track to a minimum, to allow the sport to continue in the face of the coronavirus meant Dunn chose not to be on course and he paid tribute to everyone who is going above and beyond to adhere to the new rules.

It also means he’ll have to wait until Keira arrives home before the stable can truly celebrate the win.

“We are happy to adapt to whatever we have to do to make it continue. The fact we are now locked out of Queensland makes it difficult for us because we probably run 50 per cent of our horses there.

“With that not being an option that’s the hardest thing because I have to try to protect the business a bit and do the best by my clients.

“I have quite a few staff that live in Queensland and they can’t go home.

“But I think Racing NSW’s decision not to allow people to come to the stables and racetracks after they go to another state is a good one too.

“To have a drink with Keira tonight would have been fun. You have to make some sacrifices and at least I won’t have a hangover in the morning.”