Behemoth A Grand Everest Selection For The Star

A year ago he was a $6000 horse chasing the lion’s share of $7.5 million but Behemoth, the giant of South Australian racing, will be back in Sydney next month with the stakes doubled. 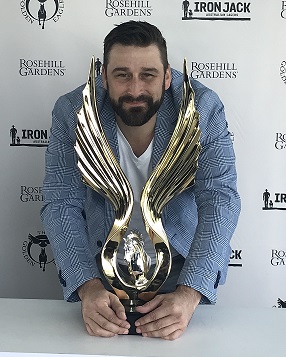 Grand Syndicates' Sam Lyons is chasing a different trophy in 2020 with Behemoth contesting the TAB Everest,

The five-year-old, a dual Group 1 winner at 1400m this preparation who stands over 17 hands, has been snapped up by The Star to run in its slot in the $15m TAB Everest (1200m) at Royal Randwick much to the delight of Grand Syndicates who took the punt on the bargain buy.

Sam Lyons, racing manager for Grand, said it’s a ‘dream come true’ for the ownership group to have a runner in the TAB Everest and is adamant he’s not there to make up the numbers.

Behemoth's selection means Grand has chances in the two feature races on TAB Everest day as they also syndicated ruling The Kosciuszko favourite It's Me.

“What our brand is all about is getting people to the races in an affordable manner and trying to have a bit of fun,’’ Lyons said.

“We don’t find these horses and say we’re setting them for Everests.

“We get them with the profile of having a bit of fun and getting to the races and enjoying ourselves. To get a horse like this that takes you on this sort of journey it really is a dream come true.”

While enjoying the build up to last year’s Golden Eagle, Lyons openly threw the idea out there that the gelding could return for an Everest in the future.

It’s fair to say he had to earn his stripes but has gone about it in no uncertain way and will be the only horse in the race to boast successive Group 1 wins as lead up form.

“I did mention last year in a couple of cheeky ways, we always thought he was a strong 1200m horse who would suit a high pressure race,’’ he said.

“This year the horse has gone and put the writing on the wall himself and shown not just potentially more but now 'bang I’m here and I’m ready'.

“There’s a real sense of timing about him going into this Everest.

“I don’t think there’s going to be a horse that’s in better form going into the race. He’s going to go there a two time Group 1 winner shooting for four wins in a row.’’

Behemoth has come a long way since that two start campaign in Sydney last spring which culminated in a fourth placing behind Kolding in the $7.5m Golden Eagle.

Trainer David Jolly took him back to Adelaide for a Group 3 win in the McKay Stakes and a fourth behind Trekking and Gytrash in the Group 1 Goodwood.

But this spring he’s come of age winning the Group 3 Spring Stakes over 1200m prior to his Group 1 double in the Memsie Stakes at weight-for-age and last Saturday’s Sir Rupert Clarke under 60kg.

“He was held up and had no momentum when the gap opened up,’’ Lyons said of his last start win.

“He went from zero to putting three lengths on most of them in a few strides. If that wasn’t enough to get him an Everest spot I don’t know what else a horse could do.

Behemoth is the seventh horse confirmed for the TAB Everest and is a $15 chance in betting.

What a win in the Group 1 Sir Rupert Clarke Stakes. 🎉🎉 pic.twitter.com/zxuzG0bykJ

A jockey will be decided on once the dust settles, he won't have another start until the Everest, and now Lyons hopes the genuinely run race that everyone is expecting will materialise on October 17.

“He’s exactly the horse we think would suit the race this year,” he said.

“But he’s not the other horse suited by that, Classique Legend and our other SA mate Gytrash are going to be suited by a high tempo too.”

The Star, which last year raced Perth mare Arcadia Queen in its slot, appears bullish about Behemoth’s chances based on a statement released announcing his selection.

“As a foundation slot holder we’re looking forward to securing a breakthrough victory next month and Behemoth will be tough to beat after winning both the weight-for-age Memsie Stakes and the Sir Rupert Clarke Stakes,’’ the statement read.

“We’re committed to supporting the racing industry and The Everest showcases the long-standing partnership between The Star, the ATC and Racing NSW.”