Logically an eight-year-old veteran sacked by three prominent Victorian trainers, compounded by a two-year injury absence, would be among the first discarded by form students assessing Saturday’s TAB $75,000, 1800m Highway at Royal Randwick on Saturday.

But since the new Albury base of rising Mitchell Beer became the final destination for Aragonese ($16 on TAB fixed odds), there’s evidence that the old comeback marvel might still have enough left in the tank to handle far younger opposition, on a raceday where all country participants are in high anticipation of being trackside for the theatre accompanying the return of the incomparable Winx. 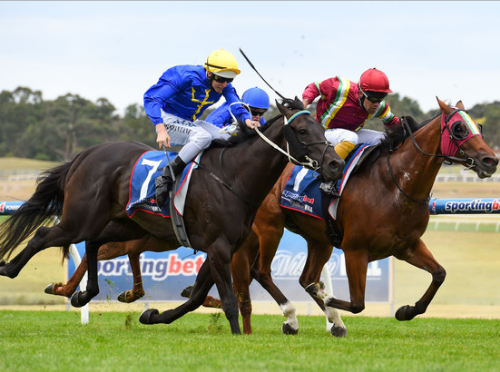 Aragonese, who started his career in 2013 with the Brideoake and Feek stables, moved on to Peter Morgan, then Luke Oliver, and finally to Beer, and has some compelling form lines back into a country Class 3.

His 59kg is reduced appealingly by Sam Weatherley’s 1.5 kg claim.

Beer 32, relocated from Mornington, has won 14 races so far this season including dual city success.

Mitchell, whose stable star Gwenneth has been aimed at the lucrative The Kosciuszko after wins at Moonee Valley and Canterbury Park, and a Flemington placing, is buoyed about the prospects of Aragonese.

“We’ve had him since October - he took a while to settle in but he’s thriving now and with a bit more luck could have won his past two starts,” Mitchell assessed.

“While his best form was three years ago, he was still highly competitive in Saturday grade and better. And all three runs this time in have been terrific.

"It says he’s certainly over any old issues and he’s still only had 27 starts. He’s a high rater on Saturday for a good reason.”

Aragonese certainly is. In 2014-15 he was close-up in Caulfield races won by eventual Group sprinters Under the Louvre and Hard Stride and beaten in photos at Sandown by classy Tucanchoo and Jacquinot Bay.

In March of 2016, Aragonese finished a close third at Sandown behind Here To There and Bascule but then went amiss and was out of racing for two years.

“Long time ago, but the form is still relevant back to a country Class 3 the way he’s come back this prep. We’ve gradually been able to work him over longer periods.

“The 1800m on the bigger track is what he wants and we’ve built him up for it. The mare that beat him over 1800m at Wagga, Ruby Skye is really smart - an Albury Cup horse.

"He gave her weight and with luck could have won. After that, we targeted this Highway at his right distance range.”

Beer is adamant he has moved to greener pastures: “NSW racing is lengths better for Country trainers than anywhere in Australia in terms of prizemoney, opportunities and conditions for trainers, their owners and staff.

“They’re travelling to a fantastic big raceday with Winx racing and a realistic chance in a $75,000 race. And then those other big prizemoney races coming up for Country trainers and owners.”

Saturday’s episode is an entree to a mouth-watering main course for millions of Australian sporting fans and international racing followers with the phenomenal Winx starting her final campaign in the Group 2 Apollo Stakes.