The $50,000 Hudson Homes Wyong Town Plate (1350m) will highlight the eight-race program at Wyong on Thursday.

Local trainer Tracey Bartley will saddle up Commute and Triple Choice ($41) in the feature race, with Commute the $2.15 favourite with TAB fixed odds. 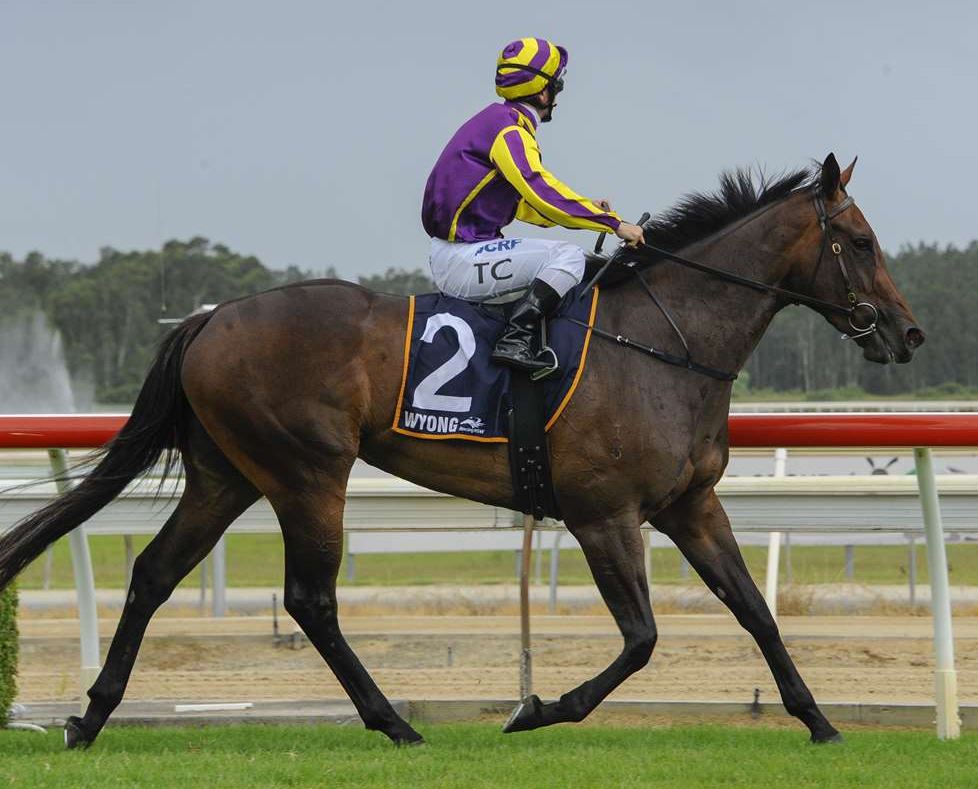 Commute with Tim Clark aboard. Image by Bradley Photographers

The four-year-old is a winner on her home track and she has been runner-up in her last two starts at Warwick Farm and Hawkesbury.

Two starts back Commute was beaten less than a length in a Benchmark 70 at Warwick Farm.

Last start at Hawkesbury on November 13 the mare chased the winner Bandersnatch throughout and she was beaten 3½ lengths.

The winner went like a bomb and Commute beat the rest of the field easily. Rachel King rode her at Hawkesbury and she has the mount on Thursday.

The Gary Portelli-trained Test of War ($5) will be hard to beat. He is a winner at Wyong and his recent Hawkesbury form is hard to fault.

RACE 1, THYNK MAIDEN PLATE, 1600M: Corporal ($5) has been runner-up in his past two starts at Canterbury and Newcastle and this is a lovely race for the gelding. Two starts back he was beaten a length by the smart Just Society in a Newcastle Maiden. He normally races back in the field but is very strong late. Oxidization ($3.60) has been placed in three of her past four starts and is the main threat. War Cabinet ($4.20) is consistent and has a place chance.
SELECTIONS: 4 CORPORAL, 9 OXIDIZATION, 7 WAR CABINET

RACE 2, WINNING APPLIANCES MAIDEN PLATE, 1000M: The speedy Rubic Honour ($9.50) is first-up after two recent trial wins. He showed blistering speed to win a recent Rosehill trial by 4½ lengths. Rubic Honour was ready to resume at the last Wyong meeting but was a late scratching when the colt appeared in the mounting yard. He was withdrawn from a Gosford meeting last weekend to be reserved for Wyong. Masked Crusader ($2.80 fav) is unbeaten in two trials and Enamour ($14) has trialled well.
SELECTIONS: 3 RUBIC HONOUR, 2 MASKED CRUSADER, 8 ENAMOUR

RACE 3, RINNAI MAIDEN HANDICAP, 1100M: Psicopatico ($15) could be good value in this race. He hasn’t been placed in four starts, however, his first-up fourth at Hawkesbury three weeks ago was good enough to win this race. He ran on well from way back and he has a nice barrier and Kathy O’Hara rides again. Adelong ($2.15 fav) is on debut after two impressive trials and Don’t Judge Me ($11) has a good fresh record.
SELECTIONS: 7 PSICOPATICO, 4 ADELONG, 1 DON’T JUDGE ME

RACE 4, AUSTRAL BRICKS MAIDEN, 1350M: The regally-bred Reaching ($2.30 fav), a daughter of former superstar Alinghi, can overcome an adverse barrier. Trained by Kim Waugh for John Messara, the legendary broadcaster Alan Jones and John Leaver, Reaching’s only run at Newcastle a month ago was an eye-catcher. The filly came from way back to get within half a length of the boom youngster Rocha Clock. Parades ($8), a Godolphin four-year-old, is on debut after an impressive trial. Solid Foundation ($6.50) has been close-up in two metropolitan maidens in the last month.
SELECTIONS: 7 REACHING, 1 PARADES, 12 SOLID FOUNDATION

RACE 5, DYNAMIC GARAGE DOORS CLASS 1 & MAIDEN PLATE, 2100M: Promising stayer La Grisa ($3 fav) returns to Wyong for her fourth race start. The New Zealand-bred mare bolted in over 1850m at Newcastle last start. Two starts back she made up many lengths in the straight to be beaten less than a length over an unsuitable trip at Wyong. La Grisa is crying out for 2100m and Avdulla rides. Alam Mo Na ($3.30) is building up to a win and she has no weight and Tommy Berry. Tyrrhenian ($6) is racing well and is a recent winner over this trip on this track.
SELECTIONS: 5 LA GRISA, 9 ALAM MO NA, 1 TYRRHENIAN

RACE 6, TAUBMANS CLASS 1, 1350M: Brunetta ($2.90 fav) won a Kembla maiden by more than four lengths last start on November 5. She was placed in her two previous starts in strong fields at Hawkesbury and Kembla. She is a strong finisher and has boom apprentice Tom Sherry in the saddle. Merlinite ($9.50) is first-up and she had very good form last prep. Peace of Mind ($13) is also first-up after good winter placings.
SELECTIONS: 3 BRUNETTA, 4 MERLINITE, 6 PEACE OF MIND

RACE 7, HUDSON HOMES WYONG TOWN PLATE, 1350M: Local mare Commute ($2.15 fav) has sound recent form with runner-up performances in her past two starts at Hawkesbury and Warwick Farm. She has raced on the pace in both starts and at Warwick Farm two starts back, Commute was less than a length from the winner. She is a winner on her home track and Rachel King has the mount. Test of War ($5) has very good Hawkesbury form and he has drawn well and has Tommy Berry aboard. Spectre ($5.50) is second-up after a solid first-up placing.
SELECTIONS: 7 COMMUTE, 4 TEST OF WAR, 2 SPECTRE

RACE 8, WIDELINE B/M 64, 1600M: Everard ($3 fav) is knocking on the door following placings at her only two starts this prep. The mare will appreciate the mile and expected good tempo. Disgraceful ($9.50) is capable of performing well with the high flying Samantha Clenton aboard. One of the Kind ($8.50) is a bold front-runner with good Wyong form.
SELECTIONS: 4 EVERARD, 2 DISGRACEFUL, 5 ONE OF A KIND

RACE 8
4 EVERARD – KNOCKING ON THE DOOR
2 DISGRACEFUL – COUNTRY GALLOPER. WELL-PLACED
5 ONE OF A KIND – FRONT RUNNER. HARD TO RUN DOWN
1 CHAMISAL – CHANCE ON BEST FORM