Trainer Murray Baker is confident the mishap that forced Madison County out of last week’s Rosehill Guineas will have no bearing on his chances in Saturday’s Group 2 $200,000 Tulloch Stakes (2000m). 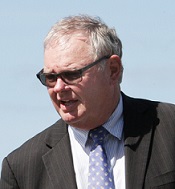 Baker says we’ll never know how Group 1 winner Madison County would have performed against The Autumn Sun, who narrowly downed NZ Derby fourth placegetter Arrogant, but what he does know is the horse is 100 per cent.

“It was nothing, he wasn’t sore but I can understand it (the scratching),’’ he said.

“I don’t know if something set him off, it’s only a short hop from Warwick Farm to Rosehill, so I don’t know what went wrong.

“That’s horses. It’s just one of those unfortunate things.’’

Madison County, Group 1 winner of the Levin Classic back in January, ran an eye-catching fourth behind The Autumn Sun in the Randwick Guineas and Baker was looking forward to stretching him to 2000m.

The gelding was due to contest the Group 1 Herbie Dyke Stakes (2000m) in New Zealand in February, where he was second favourite, but was pulled out of that race due to a pending sale to Hong Kong.

Baker said there’s every reason to suggest Madison County, $2.50 favourite with TAB, will relish the 2000m and a wet track at Rosehill on Saturday.

“He’s worked well this week and we’re happy with him.

“Your wet conditions are different to ours and he is out of a No Excuse Needed mare and they were predominantly wet trackers.’’

Baker is no stranger to winning the Tulloch Stakes, he won his first in 1987 with Our Palliser then The Bill in 1993. He teamed with son Bjorn to win the 2009 edition with Harris Tweed and two years ago Jon Snow made it four with Baker’s current training partner Andrew Forsman.

Jon Snow backed up a week later to win the Australian Derby and while Madison County is not nominated it’s Baker’s preference to run him there if he’s impressive.

Fellow Kiwi trainer Jamie Richards is on a high after Avantage’s win at Rosehill last weekend and he’s hoping In A Twinkling can earn himself a late entry into the Derby.

The New Zealand Derby runner-up has only won once in 10 starts but he was unlucky not to claim the NZ classic. Richards said the four weeks between runs has been deliberate.

“I’m pleased with how he’s come through the NZ Derby,’’ Richards said.

Madison County runs fourth in the Randwick Guineas on March 9

“We picked this race out so we could give him a bit of time after our Derby and head here with a view to backing up in the Australian Derby.

“He was caught three deep no cover most of the trip but really stuck at it and I think back to 2000m with a month between runs should suit the horse nicely.’’

Richards said In A Twinkling wasn’t among the Derby nominations due to a poor run around nomination time but a win or strong closing effort would encourage him to pay the $44,000 late entry.

He describes his gelding as a genuine stayer, who will relish getting back to 2400m, and has plenty of respect for his NZ counterparts in the Tulloch.

“Madison County is a very smart customer, he’s the benchmark,’’ he said.

“Platinum Invader was terrific in the Derby and in the lead up so those two very exciting horses should make for a good contest.’’