A city breakthrough for Team Attard at Warwick Farm on Wednesday has prompted the Hawkesbury couple to begin planning a crack at the Provincial Championships. 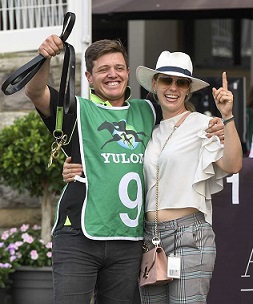 Jason Attard and Lucy Keegan-Attard clinched a training milestone when Cinderconi ($7) won the Benchmark 70 Handicap (1400m) against her own sex in a tight finish.

The gritty grey mare had previously also provided the husband and wife training partnership with a breakthrough winner in the Robert Thompson Cup (1200m) at Newcastle on December 1 after taking out a joint licence at the beginning of the season.

Cinderconi’s victory at her 17th start means she remains eligible for this year’s Provincial Championships series, which is run as a Class 5 Plate and restricted to horses with no more than 20 starts and prepared by NSW-based provincial trainers.

Hawkesbury will host the second $150,000 qualifier over 1400m on Saturday, March 7 – and that is a likely target for Cinderconi.

“She is in good form and deserves a shot at the Provincial Championships,” Jason Attard said.

“We now will have to plan how to get her there, and our own qualifier is an obvious target.

“Cinderconi had a short break (she hadn’t raced for eight weeks) before she won the Robert Thompson Cup, so we will probably give her 10 or 12 days off at home.”

The first three placegetters in the Hawkesbury heat automatically gain starts in the $500,000 Provincial Championships Final (1400m) at Royal Randwick on April 11.

The Attards have done a terrific job to get the six-year-old mare back into winning form – Wednesday’s result was also a city breakthrough for her – after she bled when third as a short-priced favorite in a Benchmark 58 Handicap (1300m) at Goulburn last April.

“It’s all about careful management,” Jason Attard explained. “We don’t do a lot of hard galloping with her.”

“Keagan has a great rapport with Cinderconi, he understands her so well,” Lucy Keegan-Attard said.

“It was great to see him land his first double in town.”

Cinderconi drew the inside alley, and Latham gave her an economical run before squeezing between runners in the closing stages to snatch victory from Betty Blooms ($6.50) and High Low Bet ($5.50).

The Nicconi mare had a Benchmark 61 rating prior to the Warwick Farm win, and that will now by revised by the RacingNSW handicapping panel.

Jason Attard said he and his wife were thrilled to lift Kate Nivison back into the city spotlight.

“Cinderconi was Kate’s first winner in town since she raced horses with the late Guy Walter (the popular Sydney trainer who passed away suddenly in May, 2014),” he explained.

“Kate kindly left Cinderconi with us after she bled at Goulburn last year, and now races her on lease in partnership with Lucy.

“She is a good supporter of our stable, so it was nice to reward her with a win in town.”