Aristia In The Right Lane For Vinery Victory

Golden Slipper winning jockey Damian Lane is expecting significant improvement from classy filly Aristia as she gets into her comfort zone at Rosehill on Saturday. 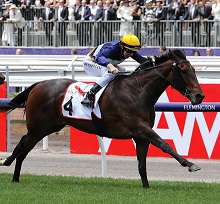 While Lane has a healthy respect for a crack field of fillies in the Group 1 $500,000 Vinery Stud Stakes (2000m) he’s been rapt with her two runs back over shorter trips.

Aristia travelled three wide on the speed throughout in her third placing in the Phar Lap Stakes (1500m) two weeks ago but refused to lay down in the straight.

“I think her runs have been great, getting up to 2000m is only going to help her,’’ Lane said.

“She probably just didn’t get around the corner that great so I think she will be a lot better for the run and a couple of gallops in the Sydney direction.

“It’s a great field, it’s a very good edition but I think she is more than capable of holding her own.’’

It’s not surprising that Punter’s Intelligence data shows Aristia covered an extra 15.1m in the Phar Lap, more than any other filly, yet she managed the second fastest last 200m of 12.36 (just 0.17 slower than the winner).

The Mathew Ellerton and Simon Zahra-trained filly is an $8 chance with TAB behind the three-year-old she finished five lengths astern from, Verry Elleegant ($2.50), in the Phar Lap.

The last VRC Oaks winner to claim the Vinery was another Victorian filly Mosheen in 2012 and interestingly last year’s winner Hiyaam also improved from a third in the Phar Lap as her lead up run.

Lane said he’ll need a few breaks to go his way early and if Rosehill stays in the soft range it would be to her liking.

“She got through the ground okay the other day, she certainly would be better on a slightly better surface,’’ he said.

“It’s not going to be easy from barrier 10, she’s going to need some luck but if she gets it she can be in the finish. She’s very versatile and can race anywhere.’’

Of course Lane won the Slipper last week for Godolphin on Kiamichi and it’s the blue team that will provide one of his main rivals in Kembla Grange Classic winner Pohutukawa.

Trainer James Cummings said the filly, a noted wet tracker, will appreciate the step up from her win over the mile last time.

“She again has to rise to the occasion against much more proven fillies here. Nevertheless, we have confidence that she is rapidly improving.”

He said there were excuses for her last start fourth in the Sunline Stakes and she’s an honest mare who will handle a wet track.

“It probably cost her being able to win the race. She chimed in but didn’t quite finish it off.’’

Nantaali was $14 with TAB on Thursday with Alizee a $2 favourite.