The Irish were all smiles on Saturday morning after Coolmore’s TAB Everest runner Ten Sovereigns completed his major fast work prior to next week’s $14 million showdown. 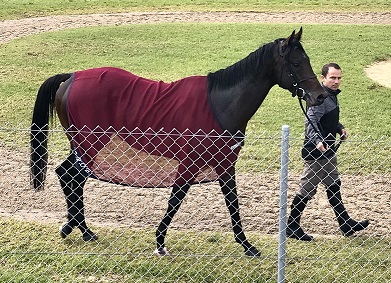 Ten Sovereigns cools down after working at Canterbury on Saturday.

It seems everything is falling into place for the Group 1 winning colt to produce his best form at Royal Randwick on October 19 and that’s certainly the view of trainer Aidan O’Brien’s travelling foreman Andrew Murphy.

Ten Sovereigns worked strongly over 1000m with companion National Guard on a soft 6 surface at Canterbury and he was asked to stretch out late in the gallop, their last 400m knocked over in about 23 seconds.

“For the ground the way it was it looked very good work to me,’’ Murphy said.

“It was a proper bit of work. He’ll have a quiet couple of days then we’ll up his exercise again but that was the last work on grass.’’

It’s been well documented that Ten Sovereigns won’t run in the TAB Everest if the track was heavy as it was a year ago.

Their 2018 contender U S Navy Flag failed to handle wet ground after significant rain on the day so the Coolmore camp received a bonus with the Randwick track expected to start Everest week in good shape.

And with a favourable for the week ahead Murphy says that will enable Ten Sovereigns to run to his best form.

“They way he looks tells me he's right, everything that’s happened so far there hasn’t been a thing he hasn’t responded to,’’ he said.

Ten Sovereigns was trotted up in front of Racing NSW chief veterinary officer Toby Koenig following his work on Saturday morning and was given the tick of approval.

All horses running in the TAB Everest will be inspected a couple of times this week to ensure they are all in in suitable condition for Australia’s richest race.

The northern hemisphere three-year-old is a $17 chance with TAB ahead of the field being finalised and Tuesday’s barrier draw.

When Ten Sovereigns won the Group 1 July Cup on the tough straight course at Newmarket he did it from the front and powered away.

Prior to arriving in Sydney he contested the Group 1 Nunthorpe Stakes (1006m) at York but was outsped over the shorter trip and could only manage sixth behind Battaash.

Murphy said a strong tempo back to the 1200m of the TAB Everest would suit the Coolmore entrant and he wouldn’t be afraid to lead the race either.

“You don’t take horses back when they break well in sprints,’’ he said.

“It’s looking ideal for him, the quicker they go the better because he’s a good finisher.’’

A week out from the race, Santa Ana Lane holds favouritism for the TAB Everest at $4.60 ahead of Pierata at $5.