Adkins Keen To Stay In The Zone For The Gong

Jockey Andrew Adkins says when you win a big race you’re always looking for the next big one. 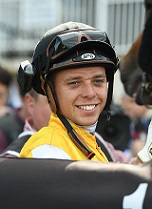 And so it is for the 22-year-old as he aims to back up his $1m Golden Gift win earlier this month when he partners Military Zone in the $1m The Gong (1600m) at Kembla Grange on Saturday.

Adkins teamed with Military Zone’s trainers Peter and Paul Snowden stable to win the Golden Gift on Dame Giselle and he said that win was a huge boost at an important time having endured a more time on the sidelines than in the saddle in 2019.

“It's a good kick along to help my career after having the time off and people see it,’’ Adkins said.

The former champion apprentice, who posted his first Group 1 win on Daysee Doom in the 2018 Coolmore Classic, had to sit out a lot of last summer with pericarditis then was involved in a bad fall at Randwick on April 13 which saw him out for over four more months.

He had his second race ride on Military Zone, he also rode the gelding at his debut, in the $7.5m Iron Jack Golden Eagle (1500m) three weeks ago and was rapt with the four-year-old’s effort in running seventh when beaten four lengths by Kolding.

“I thought he did a pretty good job at his first time over the trip,’’ Adkins said.

“There should be more speed in the race than there was in the Golden Eagle. He had a wide run three deep with cover but it was a steady run race so it wasn't the worst spot.

“I'd like to see then run along a bit and he lands a bit closer.’’

Adkins’ point about the speed in the Golden Eagle is an interesting one, while Military Zone ran home in a solid 34.99 (Punter's Intelligence) for his last 600m he’s never been a horse suited by a sit and sprint.

The gelding has drawn a middle gate in The Gong and Adkins believes he has the right form, coming through the Silver and Golden Eagle, to be a competitive chance if it is a tough mile.

He’s a two-time Group 3 winner at 1400m, the Hawkesbury Guineas and Fred Best Classic last season, and the Eagle was his first attempt beyond that trip but Adkins saw enough at Rosehill to suggest it won’t be an issue with the right set up.

Military Zone runs seventh in the Golden Eagle on November 2

“It is a step back but there are still competitive horses in the race and I still have to give him a good ride,’’ he said.

“He still has to run the mile, but that's why I'd like a fast run 1600m so he's not trying to run his last 400m super quick chasing home in a slowly run race.

“If they are going quick enough up front to be stopping and he's able to run over the top. Sitting back and running over the top of them, that's how he's going to win.’’

Military Zone was a $7 chance with TAB on Thursday in a wide open market for The Gong headed by mares El Dorado Dreaming and Luvaluva at $5.50.