No Looking Back For Berry And Stay Inside

Only Shane Dye and Ron Quinton have now ridden more Golden Slipper winners than Tommy Berry after he won his third on Stay Inside.

The Richard and Michael Freedman-trained colt was never going to lose once Berry angled Stay Inside out at the top of the Rosehill straight.

Race favourite Profiteer was allowed to use his speed to burn along in front, running a slick 34.90s first 600m under Hugh Bowman but Stay Inside absorbed the pressure to accelerate clear.

Stay Inside winning the Golden Slipper

“I popped him out just before the corner, letting him move into the race and so nobody could come around me at that point. He did it all from there, the horse did most of it,” said Berry.

“I was too scared to look back. It was an incredible feeling.”

Berry, 30, had previously won Golden Slippers on Vancouver (2015) and Overreach (2013) but this one was special due to Berry’s connection with the Freedman family.

“I’m lost for words. Having an association with Michael, he’s been a good family friend. When Nathan passed away, he and his wife Anna and their beautiful family looked after us in Singapore,” said Berry.

“We came back and I ran second (in the Slipper) for them on a filly called Frolic and I told them I’d go one better for them this year.

“Before this horse had his first start I told Michael he needed time. Now he’s bloody gone and won a Golden Slipper.” 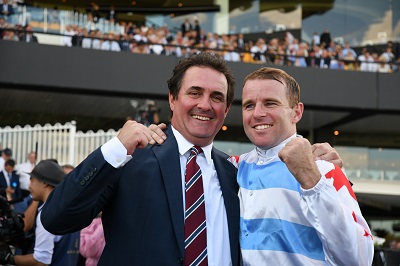 “I rode him last Tuesday morning and Michael called me on the way home in the car and said ‘I’ve seen you happier after a piece of work.’

“I said ‘I don’t know what you want me to say, he worked good, he just didn’t blow me away.’

“I rode him this Tuesday morning, I didn’t even have to say anything, I think the smile said enough. It’s just amazing what a week can do in racing with these two-year-olds. Going to the gates he was ready to go.”

“We’re very close, it goes back to the Singapore days when Nathan (Berry) was the stable rider for me up there and tragically passed away. Tommy and I have had a pretty special bond since then. I guess there’s a touch of irony that he ended up on that horse today,” said Freedman.

“Coming back from Hong Kong which was a complete disaster, to set up with Richard again. Last year we sat at home and we didn’t have a runner anywhere. To have two in the race today and come away with the winner, I’m a bit speechless.

“He’s just such a professional. I mean you can make all the plans in the world from barriers but (Berry) rode him to absolute perfection and got him into the perfect spot. He was able to find the right spot and conserve his energy, and with that turn of foot, he’s the real deal.”

Runner up Anamoe smoked to the line late, with Punters Intelligence revealing a last 200m of 11.77s. He didn’t lose an admirers, particularly Rachel King’s faith in the horse.

“He’s a superstar in the making. Draws a gate he wins,” she quipped.

Check out the results and replays from Rosehill.