South Coast trainer Mike Cattell took a punt earlier this year when he purchased a “claustrophobic” mare online for $600 after she had trialled nine times in Tasmania without beginning her racing career.

Named Jenessa, the daughter of 2013 Melbourne Cup winner Fiorente lines up at Hawkesbury on Thursday for her ninth start for her new trainer, who is confident she can break through in the Brad Widdup Racing Maiden Plate (1800m). 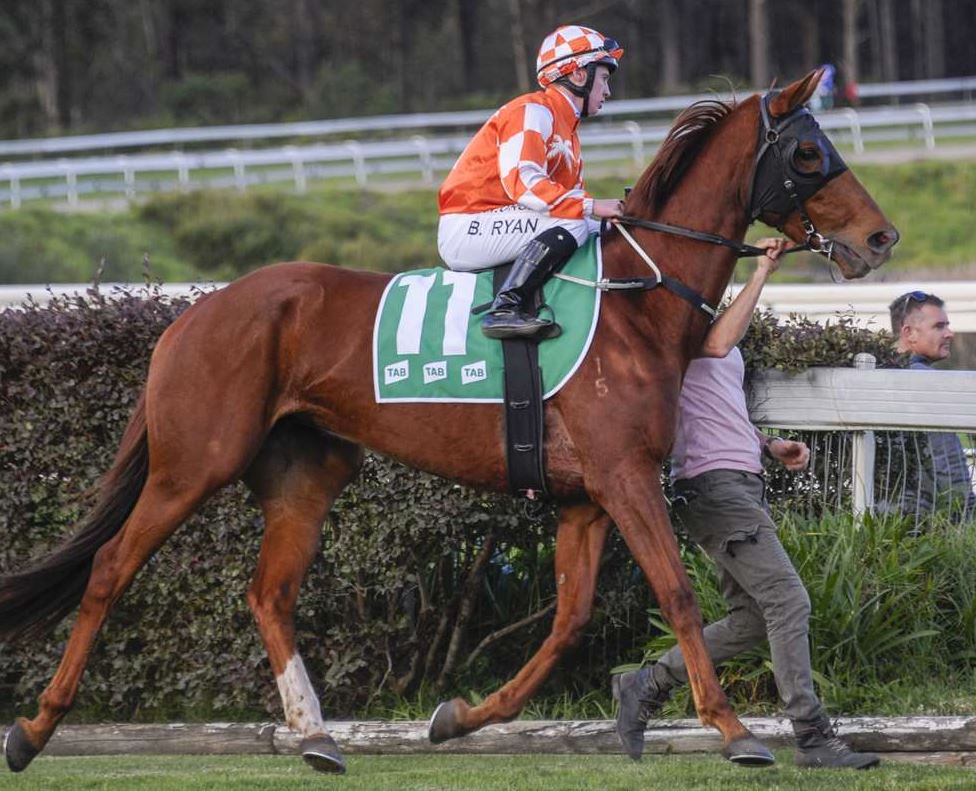 Jenessa steps at Nowra with Brock Ryan aboard. Image by Bradley Photographers

Apprentice Cejay Graham has ridden the four-year-old at her last two starts, including a Gosford 2100m second last Saturday, and again has the mount; her 2kg claim resulting in Jenessa carrying 55kg (1kg less than the limit weight).

Jenessa was a $24,000 Tasmanian Yearling Sale purchase in 2017, and had five preparations with one of the State’s leading trainers John Blacker, but never made it to the races.

“She is a big mare standing 17 hands and was a barrier rogue, and John couldn’t get her to trial satisfactorily twice in a row for stewards to clear her to race,” Berry-based Cattell explained.

“I took a punt buying Jenessa for only $600, and she has already won nearly $10,000 and I’m confident she can win her first race tomorrow. She is an absolute stayer and the long run home at Hawkesbury is going to suit her.”

Cattell says he doesn’t train Jenessa in a normal manner and considers that has been instrumental in helping reform her.

“I train my horses out of a paddock and on the beach at Shoalhaven Heads, and only go to Nowra Racecourse for jump outs,” he said.

“Jenessa took a while to trust us. She was a box walker, and appreciates not being stabled and now living in a paddock.

“I work her off the back of a quad bike in the paddock, and put her on the float every day to go to the beach. I ride her in all her work, and she is thriving and getting better with each run for us.”

Provided Jenessa can shed her maiden status tomorrow, Cattell is looking at running her at Newcastle on Saturday week in the Hunter Stayers Cup (a 2900m Benchmark 68 Handicap).

But he has an even loftier goal if she continues to improve and put on weight – along with depending on the easing of current border restrictions – by taking her to the scene of her sire’s Melbourne Cup triumph and running her in the Group 3 Lexus Stakes (2500m) at Flemington on Derby day (October 31).

Cattell has recently moved six horses on, and has only three in work (including Jenessa) and says he has room for a dozen at his Berry establishment.

Jenessa, one of Sky Racing analyst Paul Joice’s best bets at the meeting, has six rivals at Hawkesbury, and is currently a $4.80 fixed odds third favourite with TAB behind Olmeto ($3.30) and Misty Brook ($4.40).

Rachel King (12 wins) has three bookings – all for Hawkesbury trainers – at tomorrow’s season finale as she takes a three-win lead over nearest rival Jason Collett in her bid to create history by becoming the first female to win the senior jockeys’ premiership.

Collett has six bookings (but Glenn Haven Racing Maiden acceptor Quatum is instead lining up at Warwick Farm today as a $2.10 fav) and has a formidable task to overhaul King.

Tom Sherry (4 wins) has a couple of chances to at least share the apprentices’ premiership with stablemate Robbie Dolan (5 wins), or even overhaul him.

Sherry rides Whitchety Grub ($6) in the Animalcare Health & Performance Supplies Class 2 Handicap (1500m) – the final heat of the Racing NSW Rising Star series for apprentices – where Dolan’s mount From The Bush has been withdrawn.

He also partners Canberra filly Biscara ($3.80), a Randwick TAB Highway winner in May, and she will start favourite following the news that early favourite De Grawin ($3.50) will be kept for Saturday’s Royal Randwick meeting.

Gai Waterhouse and Adrian Bott (16 wins) do not have a representative at the meeting but have the trainers’ premiership in the bag.

Nearest rival Gerald Ryan (13 wins) has only one runner; Spirituality (James Innes Jnr; $3.40) who is likely to start favorite in the Glenn Haven Racing Maiden with Quatum’s non-appearance.

The rail is out 3m from the 1100m to the winning post, and in the TRUE position for the remainder. A Heavy 10 rating was posted this morning (but clear weather from herein), with a penetrometer reading of 6.35.