Australian Turf Club honours one of Australian racing’s most successful and popular administrators with the inaugural running of the Listed $150,000 Bob Charley AO Stakes at Royal Randwick this Saturday.

The meeting also features the return of some spectators to Sydney racing with owners of all runners at Royal Randwick on Saturday invited to register with the Australian Turf Club to gain entry.

Owners with runners at Royal Randwick this Saturday can also purchase dining and hospitality packages through the Australian Turf Club under protocols listed in the NSW Government’s Public Health Order. 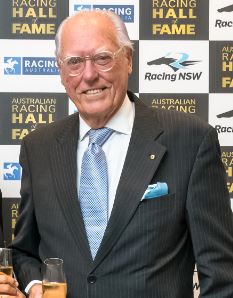 Mr Charley went on to hold a number of prominent positions in the racing industry, including Vice-Chairman of the Asian Racing Federation and a member of the governing council of the International Conference of Horse Racing Authorities.

Since 2011, Bob has also been the Chairman of the Australian Racing Hall Of Fame. For all of his great service to thoroughbred racing and the community, Bob was appointed in 2001 as an Officer Of The Order of Australia.

Australian Turf Club Chairman, Matthew McGrath, said the Club was delighted to name a race in honour of Mr Charley.

“Bob Charley is an icon of our Club and one of the most talented, influential and successful racing administrators of our time,” Mr McGrath said.

“Myself, previous Chairmen, Club Directors, CEOs and many others have been fortunate to have called on Bob’s experience, passion and knowledge of racing.

“Bob and his family will forever hold a special place in Sydney racing and our Club, and the naming of this race is a fitting tribute to his great service.”

Classique Legend, an unlucky runner in last year’s TAB Everest, is owned by prominent Hong Kong owner Boniface Ho who this year purchased a slot for the next running of the world’s richest race on turf, the $14 million TAB Everest on 17 October.

Up and coming star Adelong is the second favourite on Saturday at $6.50 with TAB for trainer Brad Widdup and jockey Robbie Dolan ahead of wet track specialist Jungle Edge ($7.50) for his trainer Mick Bell and jockey Nash Rawiller.

The Matthew Dunn trained Snitz ($8) with jockey Tim Clark is looking for his fifth consecutive win on Saturday. The Royal Randwick track was rated a Heavy 8 on Thursday morning - for the latest news on the Australian Turf Club and Sydney racing as well as upcoming meetings go to TheRaces.com.au