They are both riding for the same stable at Hawkesbury on Thursday and the rivalry will be keener than ever for different reasons.

Jason Collett chases a hat-trick of wins in the Lander Toyota Ladies Day Cup, whilst Andrew Gibbons is determined to take advantage of a rare opportunity there to land his first feature success at the track. 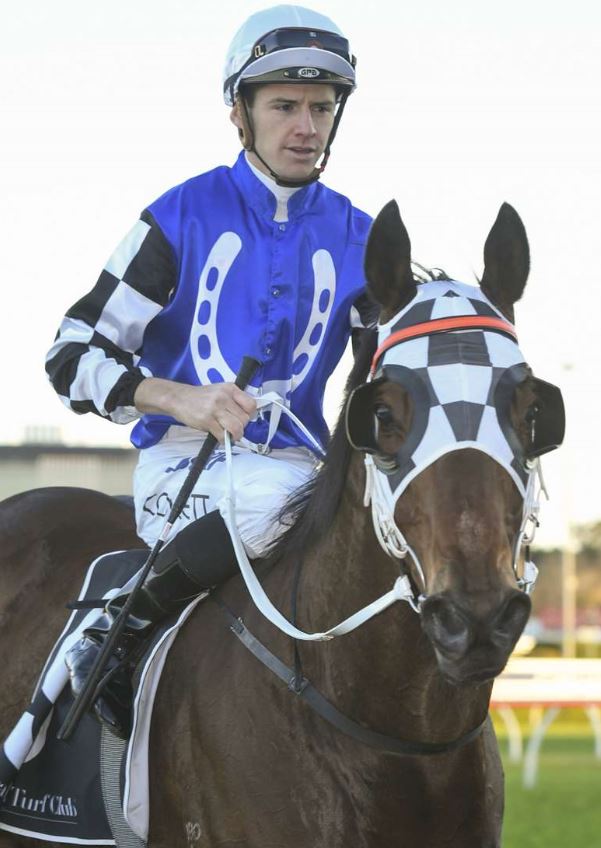 Articus with Jason Collett in the saddle. Image by Bradley Photographers

In an open race, Delectation Girl is the current TAB $4 fixed odds favourite, and Articus shares second favouritism with Taikomochi (Rachel King), who will wear blinkers.

Lees has opted for a gear change on the much-travelled Delectation Girl, who will race in a tongue tie.

“Delectation Girl was beaten only narrowly at Randwick last start (third placegetter Amingiri subsequently won at Moonee Valley), and was playing around with her tongue when she came off the track after a recent trial,” stable spokesman Lucas Miller said this morning.

“She has since worked well in a tongue tie, and hopefully it will help her in tomorrow’s race. Articus is in good form, and the form around him is standing up well.

“Jason (Collett) won on him at Randwick in September, and the horse appreciates a gap between races. We’re confident we have two great chances to win the Cup.”

Gibbons gets few opportunities to contest feature races at Hawkesbury, and is looking forward to riding Delectation Girl tomorrow.

“I won a race at the Hawkesbury stand-alone meeting quite a few years back for Peter Snowden when he was training for Darley,” Gibbons said this morning.

“I rode Delectation Girl in her first trial at Muswellbrook in June after she had joined Kris’ stable from overseas.

“She trialled well that day, but has taken a few runs here to find her form.”

Gibbons partnered Delectation Girl when she finished fifth in a 1000m Open trial at Wyong last week, and was happy with her.

“She trialled nicely, and has since worked well in a tongue tie,” he added.

The Ladies Day Cup was previously 1400m, but has been increased to 1600m this year to avoid being run at the same distance as last Sunday’s $200,000 Goulburn Cup.

Aside from his recent victories on Duca Valentinois and Pecans, Collett also was placed on Triple Elegance in 2012 and Heart Testa in 2014.

Both of those horses were prepared by leading trainer Chris Waller, who has six of the 15 acceptors tomorrow.

Parr won both the 2013 and 2014 Ladies Day Cups for Waller on Tromso and Strawberry Boy respectively.

Hawkesbury trainer Noel Mayfield-Smith, who celebrated a quinella result (Famous Seamus and Unequivocal) in 2016 and also had third placegetter Unequivocal a year later, will be represented tomorrow by On Angels Wings (Andrew Adkins).

Randwick trainer John Thompson has withdrawn recent Kembla Grange winner Laila De Vega from the Blakes Marine Benchmark 64 Handicap (1500m) to run in the Cup. Jeff Penza will ride the mare, who has been in good form in weaker company.

The rail is out 3m from the 1100m to the 400m, then 2m to the winning post and in the TRUE position for the remainder. A Good 4 rating was posted this morning.