Ryan Gives Perfect Lead With Just One Ride At The 'Farm

Young Tamworth trainer Cody Morgan is under no illusions opposing the TAB Highway series dominance of Danny Williams and Matthew Dunn at Warwick Farm on Saturday, but he’s got every reason to be upbeat attempting a winning treble with rising Moobi.

“Greg Ryan is coming down for just one ride and foregoing a full book at Bathurst; that tells you what you need to know,” Morgan enthused going into a TAB $75,000, class 3, 1600m. 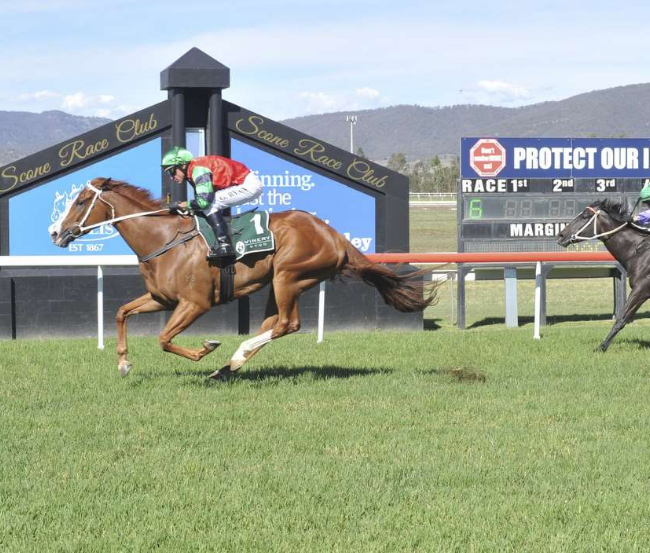 “You have to have the right horse taking on Danny Williams and Matt Dunn, but Greg has won on him with a lap full so I’m not thinking I’ll let Greg down.

“We not coming all this way to make up the numbers, we think he’s a potential Country Championships horse.

“He’ll be strong at the distance because he’ll eventually get ‘2000’ and we all know he’ll get the right ride if he’s good enough.

“I haven’t got city Saturday form like Danny’s favourite (Hemmerle) but I’ve got a real nice horse and Greg in my favour.

"We’ll settle back a little, hopefully with a solid tempo so we can close off, it’s not a big field.”

Moobi has been impressive winning by widening margins at short odds for Ryan over 1400m and 1600m at Scone, carrying 59kg and 57.5 kg on November 19 and December 4. Among the strongest regional tracks, hosting leading stables, Scone form invariably holds up in the series.

On Saturday he’s weighted on 58kg for Ryan, the regional riding icon who is fast closing on 4000 career wins amidst another brilliant season.

“He’s had a little freshen, I rode him fast work on the course proper at Tamworth on Tuesday, he’s where he needs to be for Saturday.”

Meanwhile, Morgan, who ran second in last week’s Highway with Anchois, is mindful of another vital racing issue.

“I grew up with Tye Angland, we’re close friends, we were rodeo riders together as kids. He’d be the first jockey I’d ring if I had one good enough to bring to town. My thoughts are with Tye and his family.”

Angland has been hospitalised in Royal North Shore Hospital, Sydney with serious injuries from a recent fall at Sha Tin (HK).