Brandon Griffiths can’t wait to start the next chapter of his apprenticeship when he joins the Peter and Paul Snowden stable on Monday.

The 23-year-old has been based at Randwick with retiring trainer Pat Webster for the last 12 months and is excited by the chance to take his career to a new level with the leading stable at headquarters. 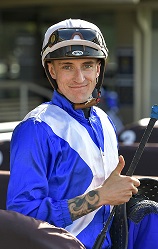 Griffiths said Webster has been instrumental in turning his fortunes around and, despite some pre-interview nerves, says he’s been well prepared for the challenge.

“We called Peter on Monday and asked if he’d be interested in taking me on and he said to give him a day to think about it,’’ Griffiths said.

“I called him (Tuesday) morning and he said to come into his office. I walked over to the office and I was just sweating all the way there, dreading if he was going to say no.

“It was very intimidating until I got to sit down and talk to him and we got chatting for a good half an hour or 40 minutes.

“I’m just excited to get stuck into it on Monday morning.”

Griffiths has a 2kg claim at the provincials and 3kg in town and Peter Snowden said he’ll have a big opportunity as the stable apprentice, as Cejay Graham is no longer with the team, to make good use of his claim.

“His weight is probably his biggest issue, he rides 55kg comfortably and 54kg at a pinch so it puts him at the upper end but is value for what he can claim,’’ Snowden said.

“He’s ridden for me a couple of times before, he speaks very well and has a good idea of what he’s doing.”

A couple of days before he becomes part of the Snowden team, Griffiths will ride Kosciusko, Webster's final runner as a trainer, at Newcastle and attempt to send his mentor out on a winning note.

He said there’s no way he’d be in the position to join such a big stable if Webster hadn’t stepped in a year ago and offered him the chance to turn things around.

At the time Griffiths was serving a suspension for a positive test to ecstasy and didn’t have a discernible path.

“When Mr Webster picked me up and brought me to Randwick this is always what he thought his goal was, to get me as far as he could in prepping me for a big move like this one,’’ he said.

“Now that he’s retiring and we’ve been accepted into the Snowden camp he feels proud and relieved, that his job, and what he and (wife) Chrissie set out to do, has been done.

“That's to give me a second chance and to proudly say I can now be apprenticed to the Snowdens.”