The look in Brave Pride’s eye as he pats his father’s warhorse Destiny’s Kiss after another win tells you the teenager is sold on racing.

Brave is of course Warwick Farm trainer Joe Pride’s 13-year-old son. You’ve probably seen him by his father’s side on race day riding the emotional rollercoaster of a horse trainer at a time many his age aren’t so invested in their futures.

For the moment, at least, Brave is invested and over the past couple of years as his interest in horse racing, particularly the training side, has amped up Joe Pride has taken it seriously.

And the best part about it? 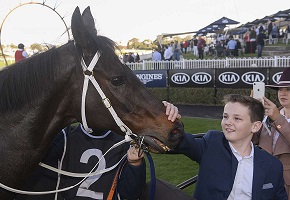 “Brave is 13 now and a lot of parents start losing contact with their kids at that age but for me it’s fantastic, I can spend good quality time with him,’’ Pride said.

“It’s great to have him come to the races with me, he’s really good company. He’s learning rapidly and it’s good because he’s in the right environment to be able to pick up some good information.

“It’s been a natural process. I keep my work very separate from my home life.

“My two girls (Alice and Charli) would be flat out telling me two horses I’ve trained so for him to take an interest it had to come from him.’’

We’re not quite heralding the start of a Pride training dynasty. There wasn’t one moment when Brave said to his dad – “I want to work with horses’’ or anything to that effect.

But that doesn’t matter. What does matter is he’s interested.

Brave’s schooling in racing, however, doesn’t come at the expense of his school and house work though as Joe and wife Kylie are dedicated to keeping the balance right.

And he’s in a fortunate position. Joe Pride didn’t have anything to do with horses until he was about 20 – his father worked in plumbing and draining and by Joe’s own admission he can’t work anything more complicated than a hammer.

Not only does Brave has his father’s experience as a multiple Group 1 winning trainer to inherit he also has the knowledge of a training great in John Size, Joe’s mentor, at his disposal.

“Kids learn fastest when they are learning about something they are interested in and while he is interested I’m very fortunate to be able to show him first hand,’’ Pride said.

“If I wasn’t a horse trainer it’d be difficult for me to get him experience or knowledge on how the game works.

“I am very proud of him. I like the fact that he wears his heart on his sleeve and is very supportive and loyal to the stable horses.

“He has a very analytical mind and is able to put emotion aside and make some calculated assessments of horses.

“If I didn’t think he had those sorts of abilities I’d be encouraging him away from this because I think they are important skills to have.’’

Brave’s favourite horse is New Tipperary. When the consistent gelding races you can see just how seriously the teenager is taking his racing education.

He can get disappointed if New Tipperary is beaten and that illustrates the passion he has.

It’s a passion that his father would have found a little frustrating early on – New Tipperary is a smart horse but his preparations tend to follow patterns and losses can outweigh wins – but it’s something he doesn’t want Brave to lose if he does head towards training. 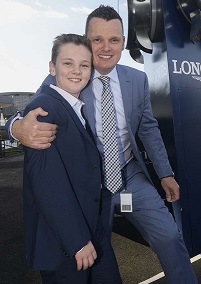 “It’s been a while since I really fell in love with a horse but when you do you become very attached and you need to be able to handle the wins and the losses, the injuries, the setbacks,’’ he said.

“That driving passion we see in our owners, if you don’t have an emotional attachment to it you’ll become disconnected quickly.

“It’s important for him from a young age to realise there’s that balance he needs to have.

“There’s plenty of tough days in this job but we’re fortunate enough to have moments where it’s a grand final, a defining moment for a horse, and the owners, and see the pleasure we can bring to them by winning them a good race.

“There are people who work just as hard or harder than me and don’t get those moments.

“When you win a big race there’s no feeling like it and I can see in him that he’s getting that same kick out of it.’’

Joe is only 47 but in the 18 years he’s been a full time trainer he’s seen plenty of change.

You’re not just a horse trainer but an administrator, a brand, a public relations agent and a factory manager. It’s a lot for one person to take on.

What Pride wants his son to have is exposure to as much insight into the game that his position allows but also the information to make his own choice about any career he may want in racing.

“What I want to do is give him the best rounded education in thoroughbreds I can,’’ Pride said.

“That involves more than just training. I’m fortunate to be able to introduce him to influential people through the industry who can teach him a lot of different aspects of the industry.

“What he does with that is going to be his decision. With anything in life I think it is important people determine which direction they go in.

“He could end up doing anything, within racing or he could take his skill set outside racing.

“But if he does want it I’m able to give him a head start.’’