The group of young men have had their photos taken with Josh Parr, Tim Clark and Kerrin McEvoy, and have been social media hits, while a shot taken with Hugh Bowman on Wyong Cup Day in 2017 has been used extensively by the club for marketing.

The group, which started out at 11 and has now more than doubled, have grown their interest in a very short time to now include racing their own horse. 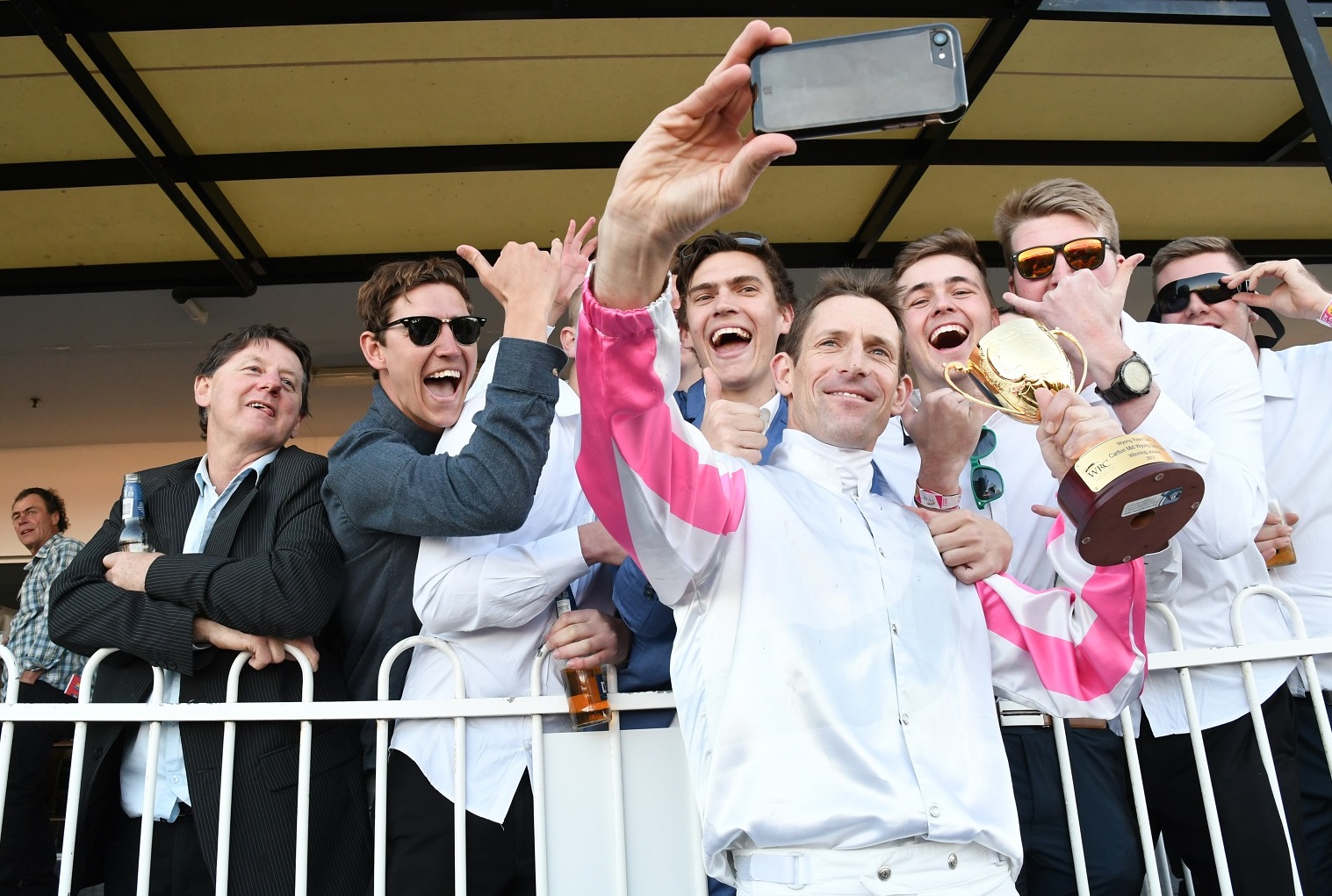 The lads with Hugh Bowman after his win on Destiny’s Kiss in the Wyong Cup – Drew Chivas is to Hugh’s left, alongside the fellow with sunglasses

“We were just a group of 11 school mates and sporting mates who came together over our common interest in racing,” 22-year-old Jack Greentree said.

“Some of us already went to the races fairly regularly but as a group our first day out would have been the Wyong Gold Cup in 2017.

“We backed the Cup winner Destiny’s Kiss and had a picture taken with Hugh.

“The picture was on the back page of the local paper and the club used it as an advertising billboard and on their members’ cards. We all got a big kick out of that.”

The group backed up a few months later with a trip to the inaugural The Everest at Royal Randwick, had another great day and their numbers began to swell.

These days it’s not unusual for at least 20 young men, aged between 20 and 25, to be trackside, particularly at Wyong meetings.

“Lyndon Appo’s birthday was around Everest time so we decided to use that as a celebration in 2017and it’s become an annual trip now.

“We usually tee up on social media when a race meeting is coming up and whoever can be there comes along.

“The initial group has got bigger with other friends keen to be part of the action. We all just love a day out at the races, the punting, having a beer, just the whole experience.

“More than anything we just enjoy racing and we respect it as a sport.”

However, a tragic accident last year brought them even closer.

Drew Chivas, 19, who was part of the original group, died while on an overseas holiday.

“Losing Drew brought us all closer,” Jack said. “We had often talked about getting our own horse to race and after Drew died, we thought ‘stop talking about it and do it.’

“A couple of the boys’ dads knew Steve Farley, so we approached him about getting us into a horse.” 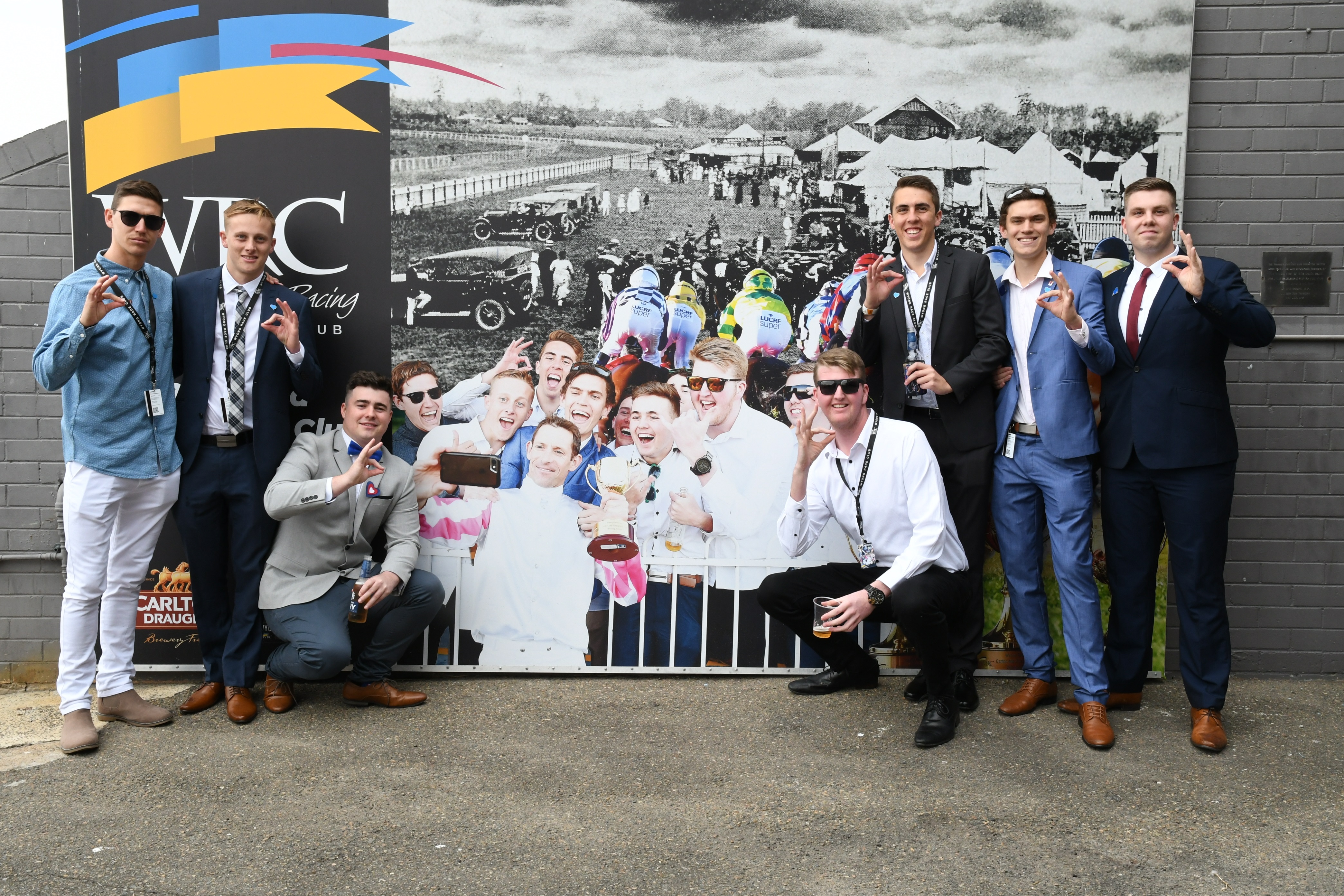 Under the syndicate name ‘Assorted Punters’ 20 of them brought into three-year-old filly Wow Wow Kapow, who has been finished in fourth place in two of her only three starts.

“My brother Shaun thought of the syndicate name. When our photo was on the back of the local paper the caption said ‘Hugh Bowman pictured with assorted punters’. It’s a bit of a laugh.

“When she had her first start at Taree, we all went up. I’d have to say that’s my best day at the races. I can’t imagine what will happen if she wins.”

The group have also bought a greyhound, yet to race, which they hope to name Our Mate Chiv’s, in memory of Drew.

There is no mistaken who their favourite jockeys are with Josh Parr and Tim Clark at the head of the list.

“They are local coast boys. We respect what jockeys do and always give them a cheer when they get a winner.

“They always come and have a chat to us when they see us and are really good.”

Wyong’s CEO, David Jewell, said the Club has been keen to support the group’s activities on course. “Yes, they make a bit of noise and a few patrons might view them having some fun with a look of horror, but we think they are great for the racing.

“We share their travels on our social media pages, which always generates lots of likes and comments.

“As an industry we need to do more to attract younger people to racing and having these guys turn up at a low-key midweek meeting here at Wyong with their mates and see them enjoying themselves and sharing the event with their friends is what the game is all about.”

HOOFNOTE: Jack Greentree reports the lads have just bought into another racehorse, Whiteley, previously trained in the city but now heading to Cody Morgan to target TAB Highways.