Australia’s number one trainer Chris Waller says the new-look NSW spring carnival has been an unqualified success and hopes racing fans and participants will embrace the change in the years to come.

And he’s been backed up by leading jockey Glen Boss who says he’s never seen Sydney racing as vibrant as he’s witnessed this spring having returned from three years in Singapore.

While Waller and Boss, who combined to win the Everest, Golden Eagle and Epsom, were among the big winners of the spring the benchmark-setting trainer said racing can’t live in the past. 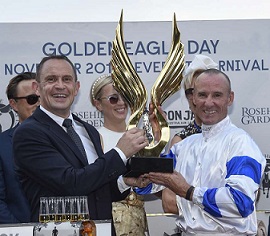 “It's hard for traditionalists to get used to and we are all guilty of that in some degree,’’ Waller said.

“We are also seeing in a short period of time how effective an Everest has been.

“I think you have to sit down and dissect it all properly but we are in a time where we have to see the positives and make sure we have a sport to be proud of going forward.

“And for all the right reasons on and off the track, which have been well documented, but good leaders will take us through the next 20 years in good shape.’’

Boss said he’s looking forward to the attention turning to Kembla Grange on Saturday where he’ll ride Star Of The Seas for Waller in the $1 million The Gong (1600m).

At 50, the champion jockey says he’s enjoying his racing as much if not more than ever and has felt the change of vibe in the air this spring.

“I've never seen a place so up and about. Newcastle was a good vibe, the energy felt great. Golden Eagle day was a buzz,’’ Boss said.

“I'm sure the Illawarra, being a big sporting town, will embrace this race. It might take a year for it to catch on but if the people get out there and have a good day it will.’’

Waller will have three runners in The Gong via topweight Mister Sea Wolf, the smart Star Of The Seas and up and comer Asterius.

He’s also a fan of taking feature metropolitan racing to new places and says owners and trainers are now spoilt for choice when it comes to opportunities to win significant prizemoney.

“It's given trainers the chance to not rush their horses at the start of the preps and gradually work through the spring,’’ Waller said.

“It's giving us the chance to showcase the sport to the Illawarra and Newcastle which I think is so important.

“From my perspective it means we haven't taken horses to Perth this year which I enjoy doing but the costs associated with going are big. You're running (in NSW) for $1 million over 1300m last week and 1600m this week, it’s big prizemoney on offer and from an owner's perspective it's great.’’

Punters believe Star Of The Seas is Waller’s best chance of winning the $1m The Gong, the Epsom Handicap third placegetter was $7 with TAB on Thursday with Group 2 winner Mister Sea Wolf $12 and last start winner Asterius a $19 chance.

It’s clear Waller agrees with the market and said if you can forgive Star Of The Seas’ last start failure in Melbourne, where he ran ninth in the Group 1 Cantala Stakes, he is well placed.

“His run in the Epsom was excellent as was the lead up run into it,’’ Waller said.

“He was disappointing in Melbourne last start, I just put it down to an off day at his first run left handed. I hope to see him bounce back because it's the right race and he is well weighted.’’

Boss, who is yet to ride Star Of The Seas, said on the gelding’s third in the Group 1 Epsom he has to be considered a strong winning chance.

“He's just below the Group 1 horses, but the ones that have beaten him are the real good ones likes Kolding,’’ he said.

“All the form around him, they're all good horses and he's not beaten far. If he's done well from his trip home, and it's not like he's at the bottom, he should be holding his form and that makes him hard to beat.’’

Mister Sea Wolf wasn’t suited coming back in trip from his Shannon Stakes win when finishing near the taiul in the Redzel Stakes (1300m) three weeks ago.

“It was definitely too short, he has a massive weight but that is the only negative. He will keep them honest,’’ Waller said.

Grey gelding Asterius gained a start in The Gong with the scratching of Testashadow and Waller said it’s worth a throw at the stumps for the owners.

“He's drawn one, he needs luck to win but we will give him his chance to storm home late.’’