Winx part-owner Peter Tighe compared the owner-trainer relationship with Chris Waller to a doctor-patient scenario – where if you find a good one you respect their expertise and don’t try to tell them how to do their job.

Tighe provided Racing NSW with insight on how the owner-trainer dynamic works in the case of a superstar galloper like Winx. The decision-making process, how the mare’s campaigns have been framed, and why no Royal Ascot or The Everest. 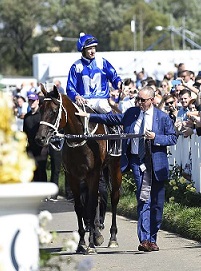 Peter Tighe leads Winx back to scale after another win. (Pic: Bradley Photos)

Winx has been prepared for an all-Sydney, four-race campaign ahead of retirement starting with The Star Sydney Apollo Stakes over 1400m at Randwick on Saturday.

Tighe said he and the seven-year-old’s other owners had never had an argument with Waller over plans for the horse.

“We’re with Chris Waller because we trust his judgement implicitly,” Tighe said.

“You don’t go to the doctor and tell him how to fix you up, so it’s basically on the same terms as that.

“We’ve had a lot of horses with Chris – not just myself and my wife, Patty, but Debbie Kepitis and Richard Treweeke. We understand and appreciate his training methods, so it’s no good us trying to tell him what to do.

“I think everyone would agree he’s done a pretty good job so far, so we don’t second-guess him.”

Tighe said that when Waller planned campaigns for Winx, he first picked a final race that would be the major aim.

“The trainer does the programming,” Tighe said.

“Chris has had the horse a long time. It’s not just with Winx but all his horses. He’s the one who assesses what is the best distance to try them over and he sets their training program according to that.

“He keeps us informed of what he’s thinking. Sometimes we might ask ‘why’ a certain race, but that’s just to understand the reasoning. We’ve never had an issue with Chris’s programming. Why would you? The horse has won 29 in a row!

“The way it works with Chris is he picks a target race at the end of the program and works backwards from there. The horse then builds up over the shorter distances to the distance he wants it to peak at for a particular race.

“That’s with Winx or any horse, depending on the level he thinks it can reach. It’s easy to talk about Winx when you look at last spring, for instance, because Chris would naturally target the Cox Plate and then work back from there.

“This campaign, he’s starting her off in a 1400m race and all things being well she’ll go to a 1600m race and a 1500m race and then the big assignment in the Queen Elizabeth Stakes over 2000m at the end of it.”

There is plenty of belief in racing circles that because Winx settles so well in her races she could have been set for and won a Melbourne Cup over 3200m going back two or three years.

Asked if the owners and Waller had ever seriously discussed doing that, Tighe replied: “No, not really. It’s a long-distance race and she was never bought for that, or we didn’t think she would be a Melbourne Cup horse early on.

“It’s a race we don’t fear we could’ve won with her, but you can’t run in everything and you’ve got to do what best suits the horse. It’s a long preparation to get to a Melbourne Cup because you’ve got to do a lot of hard work and a lot of training to get there, but it’s just another race.

“There’s the Melbourne Cup, The Everest, racing at Ascot, so many of them. We could’ve raced her between here and Hong Kong and Japan and England and the US, but keeping it sensible means trying to keep her at the peak distances that she’s good at and not over-taxing her.

She wasn't there last year but @winx_horse made the @TheStarSydney Apollo Stakes her own in 2016 & 2017. Sit back, relax and enjoy the best of the best! #gowinx @tabcomau @7horseracing @SkyRacingAU pic.twitter.com/rdk4TyInEv

“The Everest came along a bit later in Winx’s life and was just not for her by that stage. The All Star Mile only popped up recently so it wasn’t on the agenda when the planning was being done for Winx.

“It would’ve involved changing her regime and travel, so, again, it’s come along a bit late in her career to consider.”

Tighe said he had no regrets about the decision not to go to England in the middle of last year.

“It was something that looked really good and we gave it plenty of thought and as we’ve always done we tried to do what’s in the best interests of Winx,” he said.

“We all sat down and discussed it – the owners, Chris, Hugh Bowman – and there was a consensus of opinion that it wasn’t the way to go with the horse.

“We would’ve loved to have gone to Royal Ascot and met the Queen and done all that sort of thing, but it probably wasn’t in Winx’s best interests to travel halfway around the world and spend a lot of time doing that, so at the end of the day the common-sense approach prevailed.

“She’s seeing her racing days out in Australia and she’s got more than enough fans here to enjoy watching her do that.”