The Ride's Just Starting For Todd

Less than a year ago rookie trainer Todd Blowes cast his eyes over a woolly, rangy horse in a paddock and on face value could easily have dismissed him.

At the time he’d had only a license for a number of months and a handful of starters and, aside from being by a Group 1 winner, there was nothing in his pedigree that suggested the horse was worth the time and effort he needed. 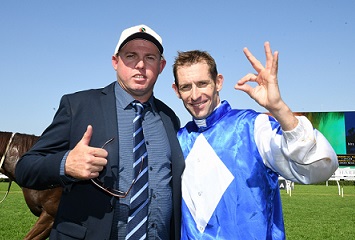 What did, though, was the way the chestnut moved.

“When I first saw him he had a big winter coat on him but had never really been worked,’’ Blowes said.

“The frame was there but we had to build all the muscle up and do a lot of slow work with him.

We’re talking of course about Noble Boy, the 2019 Newhaven Park Country Championships Final winner and now one of the most exciting horses in NSW racing.

The gelding’s rise is quite something – he didn’t make his debut until the end of October and less than six months later, having won five of his first six starts, easily accounted for a crack field of horses from across the state on the biggest stage at Royal Randwick.

It thrust Noble Boy into the big time and Blowes, perhaps a little reluctantly, with him.

But Blowes has taken some mates along for the ride – among the owners are his farrier Gray Cocking, who he’s known for 15 years, Jeremy Braun and Andrew Theuma, a couple of mates from his days playing footy for the Queanbeyan Blues, and breeder Donna Smart.

And not to mention his family – wife Kristy and sons Ryan, who gave Noble Boy his nickname ‘Hoff’, and Ben, who Blowes says is desperate to be a jockey one day.

The experience is all a bit new because the 38-year-old has spent a lot of his life in racing in the background, he works for Queanbeyan trainer Joe Cleary, he breaks and pre-training horses, rides trackwork.

But like Joe Janiak, the Queanbeyan cabbie who trained Takeover Target, he has a horse that could take him anywhere.

“He’s just one out of the box.

“He’s just a real racehorse. He loves it, he does his work, you can do whatever you want with him, he eats and you just can’t faze him.’’

What we saw at Royal Randwick on Day 1 of The Championships was something like the complete package, but with upside given it was his first preparation.

It’s in stark contrast to the horse Blowes was given by Donna Smart that needed plenty of time and education and it wasn’t until a gallop between his first and second trial that he thought “we might have something’’.

“When I first got him he was hard work, he took a long time to come around to where you could do everything easily with him,’’ Blowes said.

“He just knew nothing but he just wanted to run. We spent a lot of time just slow working on the track amongst other horses, getting him to relax and doing all the little things right.

“You could feel the power that was in him but we had to harness it. You’d take him out on the track and you were fighting him to come back to you all the time.

“If you watch his first two races he did everything wrong and still won. He put it all together at Rosehill (his third start and win) and he has improved every start since.’’

Noble Boy headed for a well-earned spell following the Country Championships and plans for his spring preparation are well underway. 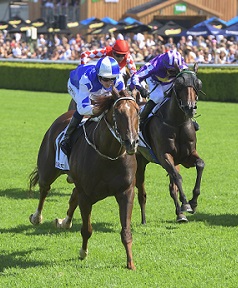 (*Since this article was written Noble Boy’s plans changed slightly, on the advice of Hugh Bowman, to include a Queensland campaign.)

The logical target will be the $1.3 million The Kosciuszko (1200m) on Everest Day in October and Blowes plans to tackle that race first-up.

“It’s a long time between now and gaining a start in the Kosciuszko,’’ he said.

“He doesn’t take a lot to get fit, he’ll have two good solid trials before it. I really think he is a miler so if we have him fresh we can get him fit with trials and jump outs and aim at it.

“He’ll be able to race that little bit closer over a mile. If he can still produce the finish he has over a mile hopefully he can pick up some nice races over the trip.’’

A statistic that might have been overlooked in Noble Boy’s Country Championships win is that the four-year-old was just Blowes’ 17th runner in a race and the only winning horse he’s trained.

It’s something he’s acutely aware of.

He owes plenty to Noble Boy for the ride he’s been on and says he wants to prove he’s no one hit wonder but that’s going to take patience.

“He’s the oldest horse I have, all the rest are unraced two and three-year-olds and yearlings in the paddock I have to break in,’’ he said.

“I have a lot more hard work in front of me left yet. Hopefully they can prove I can do something with horses other than him.

“You can’t just chuck a saddle on them and hope for the best. The work that has gone in to getting him to achieve what he did in the Country Championships….I just want to back it up with some others coming through.’’