You could see it on Tye Angland’s face, the disbelief turning to shock turning to elation as he realised what Colette’s Golden Eagle win will mean for so many.

As a jockey Angland knew exactly how to let the emotion flow, to celebrate a major victory. 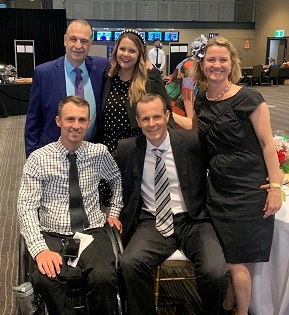 But the $7.5 million Iron Jack Golden Eagle is not like any other horse race and, as the face of the Team Tye Foundation, Angland hasn’t been as emotionally involved in a race since his career in the saddle was cut short.

Ten per cent of the prizemoney earned by every horse in Australia’s only feature race for four-year-olds is donated to a charity selected by the connections – so 18 charities benefit - and Colette’s win saw a $410,000 windfall flow into the fledgling Team Tye Foundation.

“It was all a bit different for me because usually to get a result out of a race it would be me out there riding,’’ Angland said.

“To sit back and witness that, with people around me who have helped out along the way, it was special. I was a little bit overwhelmed, I didn’t know how to take it in properly.

“And it’s great that the Foundation is getting promoted and that money is going to help get things moving and help us go to the next level.”

It was humbling, and quite a surprise, for Angland when he was informed just two days prior to the Golden Eagle that Godolphin had selected the Team Tye Foundation to be the charity partner for Colette.

Angland said he was grateful to Racing NSW chief executive Peter V’landys for putting the charity forward as an option to the connections of the 18 runners.

The idea behind Team Tye, which was only established late in 2019, is to assist and support anyone involved in racing with an injury or disability, and ultimately people with disabilities beyond the sport, in getting their life back together again.

“We’ve got to get a website up and running properly, it’s only early days, but the Foundation is there to help people in their time of need,’’ he said.

“Whether it’s through a disability or someone getting injured, a barrier attendant or a trackwork rider for example, it’s there to look after them a little bit more.

“Or if I come across someone, like my wife Erin did the other day. There was a little boy who had a lawnmower incident and now has an amputated leg, he’s only six years old, we got their number and we’d like to try to help him out as well.

“It’s all happened very quickly with winning the Golden Eagle. It’s good to put it out there that it’s not just going into my account, it’s going into an account where I can help other people.” 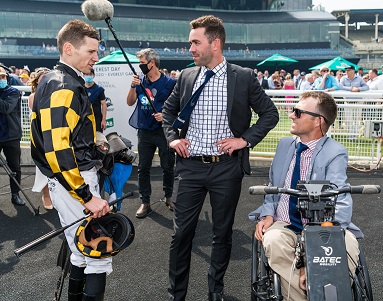 Tye Angland talks with Jason Collett after his win on It's Me in The Kosciuszko. (Pic: Kontrym).

Angland’s story is well known to everyone in racing and of course he is only too aware of how a freak incident can turn a life upside down.

A couple of years ago, with almost 1000 winners, including 11 Group 1s, against his name and an association with Group 1 winners Ace High and Trapeze Artist, the now 31-year-old was developing into one of Sydney’s leading riders.

But, in November 2018, Angland suffered spinal cord injuries after a fall at the start of a race in Hong Kong that left the popular jockey a quadriplegic.

Just over a month earlier he’d ridden Trapeze Artist into a brave second in the TAB Everest.

Of course, it hasn’t been an easy journey and how he’s adjusted to his new circumstances continues to amaze and inspire.

Angland is regularly seen supporting his jockey mates at the races and in 2019, less than a year after the fall, he was employed as an expert commentator for Channel 7s spring racing coverage.

“My life has obviously completely changed in the last two years,’’ he said.

“I’ve always been a person who likes helping people out. Having the Foundation means I have a bit of purpose to get out there a bit more and help people in times of need.

“Going through what I’ve been through, I’ve got to where I have because I have the right people around me and the right support. If I can do that for someone else I’d be proud of that, to think I’m out there helping others as well.”

The unexpected cash injection means there’ll be plenty of action behind the scenes of Team Tye, where Angland’s wife Erin serves as a director, in the early part of 2021 to bring the charity into the spotlight.

There are plans for further fundraising efforts and Angland said he’d like to see social media campaigns showing people where the money is being spent.

“It’s not just the Tye Foundation, it’s Team Tye. There’s a big team behind it,’’ he said.

“We’re not going to go out there and throw the money around, I think we will have an application process and we’ll have people go through it to get approved so everything is done properly.” 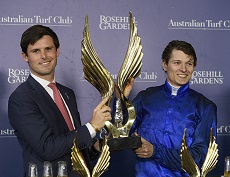 Colette, the 2020 ATC Oaks winner, won the Golden Eagle thanks to a well-timed ride from under-rated jockey Koby Jennings who took the pressure of riding one of the favourites in a $7.5m race for James Cummings and Godolphin in his stride.

It was easily the biggest opportunity of his career and Jennings said having Angland involved in the horse made it an even more significant moment when Colette crossed the line first.

“I thought about it a bit before the race, out of all the charities it was pretty awesome I was doing it for Tye,’’ Jennings said.

“He’s someone I’ve looked up to before I even had a license.

“The best feeling about the whole thing is that I know the charity, we all know Tye on a personal level. It’s fantastic that the major amount has gone to his charity.”