In a spare box high above Rosehill Gardens, Matt Jackson called the stunning win by The Autumn Sun in the 2018 Golden Rose just for practice.

Little did he know, as he uploaded the call to YouTube for friends to listen to, it would go a long way to Jackson finding his way back to Sydney and into a broadcasting role with Sky Racing.

He thought it was a pretty good description of the Group 1 race but as he drove from the airport back to Echuca his mobile phone was telling him something unusual. 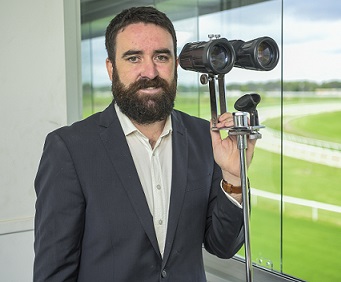 "My phone died on the way home and I plugged it into the car, it took five or 10 minutes for my phone to come on and then next thing I'm hearing bip-bip bip-bip. It went crazy,'' Jackson said.

"I had a heap of people tagging Racing NSW and Sky saying ‘this guy should get the job’. I thought surely I wouldn't get a job off one call and I didn't put it up there for that reason.

"Andrew Bensley was heavily involved in the process and he said to me 'I saw that call on Twitter and I thought to myself you'd definitely be in the running'.’’

Jackson knew there was a role available at Sky at the time - not long before he made the trip to Sydney that weekend Luke Marlow had announced he was leaving for a job in Singapore.

He'd been enjoying working for RSN in Melbourne for some time, calling harness and greyhounds and learning a lot from being something of a sidekick to legendary race caller Greg Miles, but harbouring a desire to call thoroughbreds on a regular basis.

Marlow's move to Singapore made Jackson second guess himself because of how that trip to Golden Rose day would look even though it was organised long before the gig became available.

“I said to my wife, April, I didn't want to go to Sydney because it would look like I was going up there for this job,’’ he said.

"I was happy in the role I was doing but I always wanted to call thoroughbred racing and I wasn't getting a lot of opportunity in Victoria.

"I wanted to apply to go through the process and see how far I could get and to see what people think of myself as a race caller.

"You have your own ideas on how you are going but you never really know what other people think of you.”

Back in 2011, as a 26-year-old, Jackson applied for the John Tapp scholarship which was, as it happens, awarded to Luke Marlow.

That was a turning point in his desire to be a professional broadcaster, something that started as a teenager calling local harness meetings and trials in the Echuca area, and he rates missing out back then as the best thing that ever happened to him.

He decided to challenge his somewhat introverted nature by getting voice coaching in Melbourne once a week for six months and within another six months or so he snapped up work with RSN.

“I always thought I would be able to get a job without putting the hard work in,’’ he said.

“It wasn't until I got that close, I kind of knew on the day we had the interview that I wouldn't get the job, that it said to me if you want this job you have to put the work in.

“To get to work alongside Greg before starting a career was pretty cool and I always think I owe it all to that 12 months.”

Jackson, now 35 and with three children under three years old, is like a lot of race callers in naming accuracy as the most important aspect of calling a race regardless of the code.

He tells a funny story, funny to those who didn’t live it anyway, about calling his first thoroughbred meeting at Wodonga and experiencing his, and surely any race caller’s, worst nightmare.

“I remember the TV was behind me and I looked and I was sure there were still two to move in,’’ he said.

“I wanted to see what the favourite was at the last minute, it was quite a wide market from memory, and I turned around and looked through the binoculars and there were no horses in the barriers.

“I panicked. I could sense the judge looking at me going 'what are you doing'. I was trying to find the horses and I couldn't find them.

“They'd gone about 150m and I felt sick to the stomach because I'd missed the start of the race and had to call them from where they were.’’

He brings that story up because, aside from wanting to get it right, he makes the point that, as a caller, he’s always eager to improve.

Anyone on social media will often see a tweet or post asking for feedback, for what punters want to hear more or less of, as part of the quest to be better.

Matt Jackson makes no secret that he wants to be in a position to be Darren Flindell’s replacement at whatever time Sydney’s number one caller hangs up the binoculars. And that means the hard work, including travel to various tracks in NSW, never stops.

“I'm not satisfied with where I am as a caller and I always find it good to know what people like to hear,’’ he said.

“I've got it in my head what people want to hear but the punters, the viewers and listeners are the ones that are listening to what we are doing.

“I've always wanted to call races in a way that people who can't see the race feel like they get a good picture painted for them. If I can call a race and those listening on radio can work out what's happening that will translate to people watching.

“Every time I call I listen back to every race but I always listen back the first time without the vision. I think ‘does that make sense with what happened at the finish’, then I'd re-watch the last 600m with the vision.

“I'm calling pretty well but I still have a way to go to get to the level I need to be.’’

While Jackson hopes that punters and racing enthusiasts enjoy his calling he said feedback he received from Flindell himself about that Golden Rose call and John Tapp, whose scholarship he missed out on to set him on his current path, is invaluable.

“I listened back to (the Golden Rose call) a while ago and I couldn't believe how I sounded then,’’ he said.

“I feel like I have improved a lot. Hopefully in two or three years I'll look back at the calls I'm doing at this time and think I'm a better caller than I am now.’’