There is nothing better in sport than a champion racehorse and there won’t be a better place on earth to be this Saturday than at Randwick for the farewell of the mighty Winx.

If you’ve already got a ticket to the second day of The Championships, fantastic. If you’re thinking of buying one, get in quick because they’re going fast. If you’re unable to go, make sure you still catch the action live, either on TV or radio.

It is bound to tingle the spine when the greatest horse of our time – maybe the best ever – races for the last time in the $4 million Group One Longines Queen Elizabeth Stakes over 2000m.

And you don’t have to be a rusted-on racing fan to feel the excitement. Casual racing fans, or even those who know little or nothing about the sport but have heard the name and are wondering what all the fuss is about, check in on the day to find out. 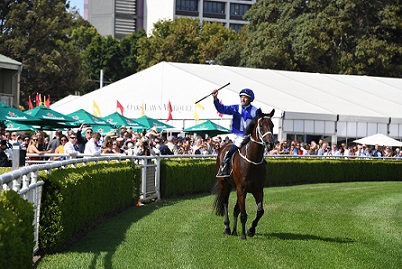 Winx's final race start, at Royal Randwick on Saturday, is an event not to be missed. (Pic: Steve Hart).

You certainly won’t be disappointed by the enormity of the occasion and you might just be hooked for life on the thrill of racing once you see what Winx has got to offer.

Just like on day one of The Championships, there is an incredible 10-race card on offer and the Queen Elizabeth is one of four Group One events. The others are the Schweppes Sydney Cup over 3200m, Heineken 3 Australian Oaks (2400m) and Coolmore Legacy Stakes (1600m).

Plus, there are three Group Two events, two listed races and the Polytrack Provincial Championships Final.

It’s a feast of high-class competition, but still the spotlight will be firmly on the seven-year-old wonder mare as she bids to bow out a winner.

Regular race fans know Winx back-to-front. Her brilliant race record, her every compelling statistic. But for those who know the name but not a lot more, here’s a run-down of her incredible career:

Winx has raced 42 times for 36 wins, a stunning rate of success in itself. But the most amazing thing is that she has won her last 32 races in succession, an Australian record ahead of Black Caviar’s 25 straight.

Among her victories are 24 Group Ones – a world record.

Earlier this year she was officially rated as the equal-best racehorse in the world.

She hasn’t lost a race since she was a three-year-old – four years ago.

Among her wins are the biggest races on the Australian calendar – many of them repeatedly. Four WS Cox Plates (the only other horse to win more than two is the great Kingston Town, with three), two Queen Elizabeths, the Doncaster Mile, the Epsom Handicap, four George Ryder Stakes.

The list goes on. Winx’s aura has grown as her winning streak has lengthened. Ten wins in a row, great. Fifteen, fantastic. Twenty, magnificent, but hang on, we’re getting into Black Caviar territory now. Could she equal that record? Could she break it? Done and done.

Now we’re out to 32 in a row and everyone is hoping for the perfect send-off. Thirty-three wins straight and say goodbye. Thirty-seven wins in total – the same number as the legendary Phar Lap, the horse with whom Winx is most compared.

Trainer Chris Waller and jockey Hugh Bowman have done a fantastic job. Waller manages to get Winx to the races in such consistently good order that she keeps winning against all-comers, and Bowman consistently puts her in positions from where she can produce her trademark brilliant finish.

We saw last Saturday, when Winx had an exhibition gallop before race one at Randwick, that she is ready to go out with a bang. She looked majestic as Bowman allowed her to stride along at about 85 per cent of full power once she entered the home straight.

Winx is already up there with the Don Bradmans, Rod Lavers, Cathy Freemans and Australia IIs in Australian sporting history and there is only one more chance to see her strut her stuff.

If you can be there, do that. Don’t regret not taking that opportunity. If you can’t be there, watch it on TV or listen to it on the radio. And then read all about it afterwards. This will be a moment in time you owe it to yourself to experience.

It promises to be something really special. Awe-inspiring. Unforgettable.

All the entries, form and replays for Day 2 of The Championships at Royal Randwick