Trainer Peter Snowden vividly remembers when Redzel was struggling to lift his benchmark beyond 72 and he had to tell the owners he thought the horse had ‘met his match’.

Redzel walked into the stable as a colt in 2015 after two starts under Gerald Ryan but, as pleased as the champion trainer was to pick him up, after a few starts he’d gone about as high as Snowden thought he could. 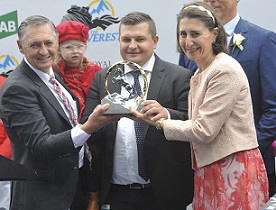 This is the horse that, since the owners made the call to geld Redzel, on Saturday at Royal Randwick will attempt a third win in Australia's richest race, the $14m TAB Everest (1200m), to add to his two Group 1 wins and over $15.6 million in prizemoney.

Snowden revealed the advice of jockey Hugh Bowman, who rode Redzel in seven of his first eight starts, was crucial in turning the horse we know as ‘Richie’ into the superstar he is today.

“The first few starts we gave him we tried to get him back off the speed and switching off because he had a tendency to go hard,’’ Snowden said.

“Hughie was riding him work at the time and said he’d been on before and knew a bit about him. He said he’s a free running horse but I said if anything we need to try to harness that a bit and work on getting him back.

“It just wasn't working with him at all, he was turning it up and not trying.

“That’s when Hughie said we have to change this horse around. He said we were taking away what he really is and maybe we should let him roll and hopefully in time he learns to relax.

“Once we started to let him run the horse changed and his form changed and he got better and better at what he does.’’

Six starts after he was gelded Redzel’s rating surged from 72 to 100, he was a Group 3 winner and Bowman’s insight was paying off.

When 2017 rolled around Snowden began to sense there was a smart sprinter in the horse that used to not try and during that autumn he was a revelation.

He went down narrowly to English and Russian Revolution in the Challenge Stakes and The Galaxy then won the Hall Mark and the Group 1 Doomben 10,000.

Around that time the Winx phenomenon had begun so Hugh Bowman would only ride him once more, in the Shorts that year. At his next start Kerrin McEvoy guided Redzel to his first TAB Everest win and nobody else has been on board in a race since.

“That autumn was when he turned from a good horse to a great horse,’’ Snowden said.

“You never like to admit defeat but if I was wrong I’m happy to be wrong.’’

On Saturday, Redzel will become the only horse to contest the TAB Everest in all three years and he’ll have achieved a remarkable feat of going into the race as an underdog on each occasion – he started $8.50 in both Everests and is $11 with TAB for the threepeat.

That’s despite proving he’s racing in good form, after an indifferent 2019 autumn, with his third Concorde Stakes win and a gutsy third in the Shorts as his two Everest lead up runs.

Snowden is well aware the mountain is a bit higher in 2019 due to the depth of the field but as it stands Redzel is the only horse to climb that mountain and for the second year Yuesheng Zhang’s Yulong Investments has afforded him a start.

“It's good to be part of it again, he's the only horse to make the race three times, it's a privilege,’’ Snowden said.

“I’m happy with the horse, Paul and I said to ourselves during the week he's probably as good as we've had him before and if that's good enough so be it.

“I’m proud to think he has been nominated three times, you don’t just put yourself in there.

“Someone has to recognise you, when you’re paying $600,000 for a slot you have to make sure you get the best horse for your money.

“Mr Zhang jumped on when his form was a little bit average. I thought that was loyalty and courage, we’re very happy that he did and since his last start he’s really come on’’

Redzel completed his preparation for a third TAB Everest with a gallop at Randwick under Kerrin McEvoy and the seven-year-old drew seven in the 12 horse field.

There’s been a lot of talk about how the race will be run and with the expected speed set by Nature Strip the theory goes that takes Redzel out of his comfort zone.

But Snowden is quick to point out in 2017 Redzel parked himself outside Houtzen before holding them off while last year he was simply the best wet tracker after being allowed to control the pace.

“He doesn't necessarily have to lead and dictate,’’ Snowden said.

“You know he’s going to be forward, how far forward depends on the speed of the race.

“Last year I think the weather really played into his hands, he was the only leader in the race and got a soft time in front.

Dual #TheTABEverest champ Redzel had his final gallop Tuesday morning ahead of Saturday’s $14m race, jockey @KPMcEvoy was on board and he sums it up for everyone.@tabcomau @SnowdenRacing1 @YulongInvestme1 pic.twitter.com/7nZLqizlOJ

“There’s some good backmarkers there so you have to be mindful you’re not going out of the comfort zone too early in the race.’’

That job is Kerrin McEvoy’s and he said tactics, not just his, are going to be vital to the outcome.

But he has more than enough faith in the warhorse, illustrated by electing to ride him over Classique Legend this preparation, and the form he’s in to know he’ll give it 100 per cent.

“His form since he’s come back has been better than last prep, everything says he’s back on song and he’s had that nice little let up into this Everest run,’’ McEvoy said.

“It’s a great line up but I’m happy with how our horse has been doing it.

“He just needs a fair roll of the dice and we will be there giving our best over the last two furlongs.’’