Sneak Peek - The Run To The Rose

Not only is the Group 2 Run To The Rose a vital lead up to the $1m Golden Rose, the major spring Group 1 for the three-year-olds, it’s shaping as a real pointer towards the TAB Everest.

It’s the mouth watering clash we’ve all been waiting for as the two-year-old stars of last season, Golden Slipper hero Farnan, Sires’ and Champagne winner King’s Legacy and JJ Atkins winner Rothfire, face off with the contenders like Mamaragan, North Pacific, Peltzer and possibly Anders.

The race started life in 2003 known as the Monakea Quality, with the Frank Cleary-trained Gilded Youth successful and the likes of Eremein and Paratroopers winning under that name in subsequent years.

Six Golden Rose winners have won the Run To The Rose, the latest was last year when Bivouac downed Yes Yes Yes and Exceedance in both races.

And there’ll be plenty of Everest talk in the lead up to, and particularly after, the race with Queensland gun Rothfire already having a slot secured through miRunners, interest in how Farnan has returned and whether something else can make a case for selection.

Bivouac wins the 2019 Run To The Rose

Who are the major contenders in the 2020 edition?

Farnan (trainers Gai Waterhouse & Adrian Bott) – he’s the likely two-year-old of the year after a season where he only suffered one defeat, in the Magic Millions with excuses, but ran out one of the more dominant Golden Slipper winners in recent years. He’s put himself on show with two impressive barrier trial wins and co-trainer Gai Waterhouse, who last won the race with Pierro in 2012, won’t hear of him being beaten.

Mamaragan (trainer John Thompson) – this colt was the one behind the eight ball as a two-year-old yet managed to win the Skyline Stakes on debut then place third in both the Golden Slipper and Sires’ Produce despite giving away experience to his rivals. After trialling well behind Farnan he caught the eye with a closing third behind Anders in the San Domenico Stakes where he had to be ridden patiently from the outside gate. The 1200m is more to his liking and has race fitness.

King’s Legacy (trainers Peter & Paul Snowden) – there’s every chance that this colt, the only youngster to win more than one Group 1 at two, could find the 1200m a touch sharp against the more specialist sprinters but his quality is unquestioned. He was a Group 3 winner at 1200m at his second start and ran a respectable race in the Slipper but really came into his own as the distances increased. He’s been in work for a while and trialled quietly on two occasions.

Anders (trainers Ciaron Maher & David Eustace) – if the runaway Rosebud and San Domenico Stakes winner adds his presence to this field it’ll really make for a race. He’s run them off their feet over the 1100m in his two starts this season and the margins suggest 1200m won’t be out of his reach. He downed Peltzer last start, a horse that will relish the extra 100m. If he’s good enough to run it out strongly and beat such a cracking field he’d make a strong case for an Everest slot. 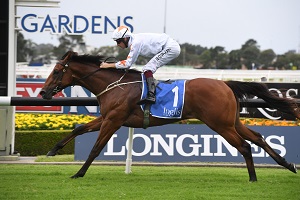 Rothfire (trainer Robert Heathcote) – just how good this smart Queensland gelding is we’re about to find out. He’s been defeated just once in seven starts, that was on a very wet track, and made a mess of his rivals taking out the Group 1 JJ Atkins over 1400m in June. His preparation for this race included an easy barrier trial win at Doomben, a small stable mishap that forced him to miss a jump out then an exhibition gallop where he was clocked at 32 seconds for his last 600m.

North Pacific (trainers Michael, Wayne & John Hawkes) – he’s the winter find that we’re all eager to see pit himself against the best of his age. After a solid debut in the Silver Slipper he didn’t race again until July 11 when he easily scored at Rosehill on a heavy track. He then emerged a month later on another heavy track and posted a five length win in the Group 3 Up & Coming Stakes, seven lengths behind him was Holyfield who subsequently won the Ming Dynasty.