Self Confidence A Prime Asset For Vella

If training titles were won and lost on self-belief, Hawkesbury-based horseman Matt Vella would be eyeballing Chris Waller and James Cummings in the premiership race already.

It isn’t cockiness but rather an infectious confidence that bubbles from 27-year-old Matt Vella and he has every right to be optimistic about his future as a trainer, given not only his mentors but the network he has built through a large breakers operation.

So big in fact, he had to cut back. 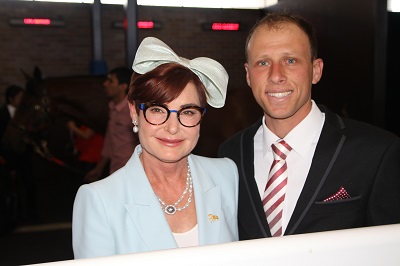 “A couple of years ago my parents reminded me that everything I wanted to achieve in racing I already had, ‘to quit while you are ahead’, and I thought about it having reached my goal of breaking in horses for all of these prolific trainers but the new goal is to make it as a trainer myself,” said Vella.

Working with horses comes naturally to Vella, but it was a chance moment as a child that that changed the course of his working life.

“I never really had horses early, none of my family liked horses, it just happened that one of my relations, not even a close one, would buy ponies and sell them,” recalled Vella.

“Out of a mistake, I got on a horse one day, I was about six years old and it took off on me, I stayed on it and that gave me the impression I could ride a bit. On weekends from then on I’d ride ponies, get bucked off, and learnt a lot that way.”

At the age of 13, Vella was introduced to thoroughbred racing when he started work experience alongside Scott Singleton at Bart Cummings’s Princes Farm. Fast forward a decade and now there’d be very few Sydney trainers or prominent owners, for that matter, that doesn’t have horse in their barn that Vella has broken in. Vella even had a short stint as a picnic jockey, running second in a Bong Bong Cup from just a handful of rides.

“I was too heavy to ride professionally. I rode one winner from about 10 but wasn’t much of a jockey.

“I didn’t have the vigour, I like relaxing horses more than firing them up, so it really worked against me,” said Vella.

“I never originally thought I wanted to train because it is such a hard industry to crack but having the support I do, I’m pretty sure If I do my job correctly, I can get somewhere. I think it’d be silly to at least not have a crack with the support of some wonderful people, it has given me a big head start. 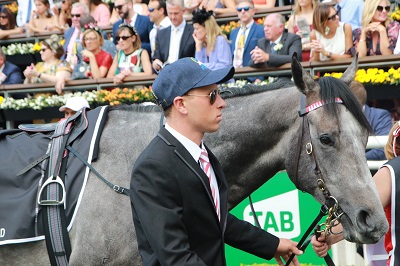 Vella with Classique Legend ahead of The TAB Everest (Pic: Grant Guy)

“I really should give my biggest mention to Sir Own Glenn – he is the one that bought the facility, put me in there and said, ‘do your best, have a go and I’ll fund you’.”

That facility is Glen Haven Park at Hawkesbury, Tony McEvoy’s previous Bylong Park base, which is Vella’s breaking, pre-training and training base.

Vella has broken in over 2000 racehorses, among them Golden Slipper winner Overreach and a gluttony of Group winners during his time working at Darley prior to branching out on his own, but there’s two current burgeoning stars that he believes could eclipse all of them – Classique Legend and Fasika.

“When I was at Bart’s I sat on Viewed, Swick, Mimi Lebrock and even rode Saintly but I think these two in terms of breaking them in from scratch will end up the best two,” said Vella.

“What Classique Legend has done in his short few starts has been unbelievable. He had a few niggling issues early on as everyone knows so we took our time with him. He’d only just turned three before he made his way to town and he blossomed.

“I liked him in the sense that he was a nice big strong horse but I couldn’t say he jumped out of the ground at me.”

Fasika, on the other hand, was anything but unassuming. Vella breaks in over 100 horses a season and perhaps 10 will really test his expertise. 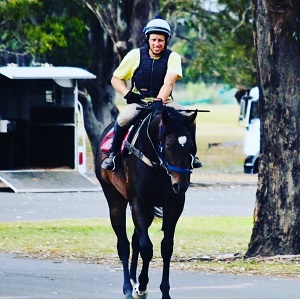 “Fasika was one of the worst ones I’ve had in a long time” remembers Vella.

“After I had given her four or five rides, I rang James Moss from Tri Colours and said I’m going to have to tell Joe (Pride) that this breaking in process will need to be done in several stages.

“I can’t do too much with her as she’s mad. They were my words to him. After three little preparations she was a quite as a lamb. It is satisfying when they turn out to be as good as her.”

Vella is currently training around 10 horses, flanked by training assistant Andre Rabbet and breaking assistant Enzo Mezenguel, but with a lot of young horses still to come through, by early next year Vella’s numbers will double.

“The older horses aren’t superstars, but they are winning their share of races. I’m so lucky that Carmel and Sir Owen have given me such quality yearlings to start off with,” said Vella.

“I am also fortunate that I have broken in Group One winners, so you get the feel for those horses. You learn what good horses feel like and you can then judge your own horses off them.

“There will come a time where I need to decide whether I want to be a big breaker and a little trainer or slowly turn the tide. I am going to let the results make that decision for me.”