There’ll be no grand declarations from trainer Robert Heathcote about his exciting three-year-old Rothfire ahead of his Sydney spring campaign but securing a TAB Everest berth is atop the hit list. 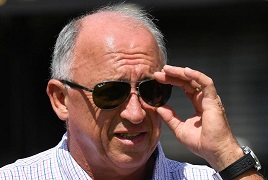 After Rothfire’s first public appearance in a Doomben trial on Tuesday what Heathcote is happy enough to say his gelding is going to be a better horse at three than he was winning six of his seven starts at two.

The Group 1 JJ Atkins winner is on the $15 line with TAB in The Everest and $7 second favourite for next month’s Group 1 Golden Rose (1400m) and Heathcote can’t wait to test him out against the best of the best.

“There’s some stoutness with my lad, he’s grown, I’m not going to say he’s going to go through undefeated but there’s an exciting future for him,’’ Heathcote said.

“I astounded a couple of people last preparation when I said at the same stage he’s better than Buffering. That’s as a two-year-old going into the JJ Atkins and he was pretty impressive winning that 1400m Group 1.

“Admittedly it was a Covid 19 Group 1, so you could say it was restricted Group 1, so the proof will be in the pudding when we get down to Rosehill.’’

Of course Buffering, a seven time Group 1 winner for Heathcote, had to contend with the likes of Black Caviar, Hay List and Sepoy, to name a few, in the early part of his career and stars like Chautauqua and Lankan Rupee in the latter.

He’ll meet many, if not all, of that quartet in the Group 2 Run To The Rose (1200m) at Rosehill on September 12 and performances in that race, and then the Golden Rose, will be pivotal to his Everest prospects.

“Farnan was clearly the number one two-year-old nationwide but he hasn’t been tested yet,’’ he said.

“Doesn’t that Run To The Rose look like a cracking race. There’ll be no hiding.

“Here we are off to Sydney with Everest aspirations if we can pull it off. A good showing might tweak the interest of a few slot holders but I think they are going to sit on the fence and see what happens.’’

Rothfire led all the way in winning his 840m trial and both Heathcote and jockey Jim Byrne said it was exactly what they wanted to see for his first serious hitout.

It proved to them that the gelding had matured, not so much by what he did during the run but pre and post trial how he’s developed really stood out.

“I took the liberty of bringing him back a week or two earlier than I needed to and that’s given me a bit of time to give him a nice soft first trial,’’ Heathcote said.

“I’ll give him another one in two weeks time and then it’s two weeks to the Run To The Rose.

“He’s such an exciting horse. He pings the gates, travels, just before his trial there was a delay and he just walked around the enclosure with his ears pricked taking it all in, like he was having a Sunday walk, and that’s such a good quality to have.

Star Queenslander Rothfire kicked off his Golden Rose and #TABEverest quest in style at Doomben on Tuesday. He's $7 with @tabcomau in the Rose and $15 in the Everest. @miEverest pic.twitter.com/rSGws2Klv1

“It was only 840m and Jimmy didn’t breathe on him, it wasn’t the fastest trial of the morning but there was plenty left in the tank.’’

Byrne plans to base himself in Sydney for the spring, after Rothfire’s second trial on August 25, knowing that if he didn’t “follow my gut’’ and stay with a horse of his potential it’d be something he could regret.

He said the newfound ‘mellowness’ the youngster displayed is what he wanted to see coming back from a break with the program Heathcote has set out for the spring in mind.

“You always knew when he came back that he was going to be a more rounded horse and I think that is what we have now,’’ Byrne said.

“He has that mellowness about him now, previously if he knew he was galloping he’d want to go a bit hard.

“For mine the trial was just ticking a box basically. Just go out there and do a little track gallop and he did it well all the way through.

“There’s so many decisions I’ve made in the past where I’ve been kicking myself that I made them. I’ve talked to my wife about it and I have to support him and go there and hope I can have a bit of luck with him.

“He’s the sort of horse that doesn’t come around a lot, especially for us Queenslanders. He’s impressed me all the way through and sometimes you’ve got to follow your gut.’’