Last November 19-year-old equestrienne Hannah Klep had a six-month goal of competing in three star events with her off the track thoroughbred, Reprieve. This week they will represent Australia at the Oceania Eventing Championships in New Zealand, blowing even Hannah’s own expectations out of the water.

“I have dreamed of representing my country since I began eventing but I can’t believe I am actually here,” an ecstatic Hannah said. “It’s been a whirlwind and it’s so exciting.”

Just four exceptionally talented athletes make up the Australian Young Rider Team and of the four horses they compete with, two are thoroughbreds. The second is Silver Force, a former West Australian galloper who is now partnered with Tayah Andrew, a trackwork rider from Perth. The team completed an intensive camp last week and the training has continued in Taupo.

“Reprieve flew over to New Zealand on a special flight on Monday night and I got in on Tuesday,” Hannah said. “Like always, Reprieve has taken it all in his stride and settled in really well.”

The Oceania Eventing Championships run from Friday to Sunday and include three phases – dressage, cross country and showjumping.

“Cross country is a significant test here because it’s a longer course than normal but this is where Reprieve will excel,” Hannah said. “Being an off the track thoroughbred Reprieve has the natural fitness and stamina to keep jumping and galloping at speed. 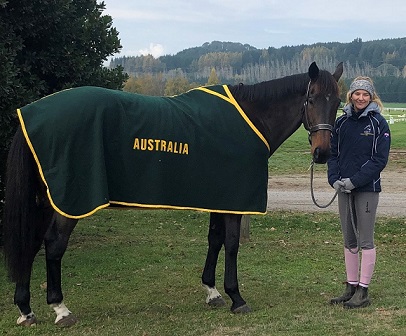 Hannah and Reprieve in New Zealand.

This is the first time Hannah has taken Reprieve overseas and it’s given her an invaluable insight into the demands of a being a professional rider.

“Representing your country is a massive deal and I am feeling the pressure to perform to the best of my ability but I am trying to put that out of my mind and just appreciate the experience,” she said.

“The camp last week and the training this week has really built my confidence and confirmed to me that Reprieve is in top shape.

“The are Olympians here both in the Senior team and as coaches and training alongside them has been priceless. The Australian coaches have been fantastic and literally by our side 24/7.”

Hannah first met Reprieve when she was 14 years old. Her horse went lame and her coach arranged for Hannah to borrow him. At the time Reprieve hasn’t long been retired and was being retrained by Kylie Higginbotham, a stablehand at Joseph Jones Racing where Reprieve had spent most of his racing career. She saw the bond developing between Hannah and Reprieve and agreed to sell him to her a few months later.

Hannah took Reprieve to Pony Club and continued regular lessons with him. They began competing at introductory level and completed 14 pre-novice events before qualifying for One Star. At age 15 Hannah and Reprieve represented NSW at The Interschools Australian Championships for the first time then progressed to two star competitions.

“He was learning while I was learning and he was just so good every step of the way,” Hannah said. “I think going through that journey together created our bond. He’s my once in a lifetime horse.”

Hannah hasn’t set any goals beyond the Oceania Championships. Instead she’s just taking it all in.

“We will come home next week,” she said. “I will put him on the plane and two vets will fly with him. The goal is the get him home safe, sound and happy. He is proof that hard work and persistence are the keys to success.”

Click here to help Hannah with the financial pressure of representing Australia internationally.