It's a familiar scene. Chris Waller surrounded by TV crews, reporters and photographers holding court talking about a horse race.

His usual sporting analogies were there - cricket, football prominent, even motor racing - but this is a relaxed Chris Waller, somewhat excited by the new challenge of conquering the $14m TAB Everest (1200m) at Royal Randwick on Saturday and not weighed down by the public expectation with Winx. 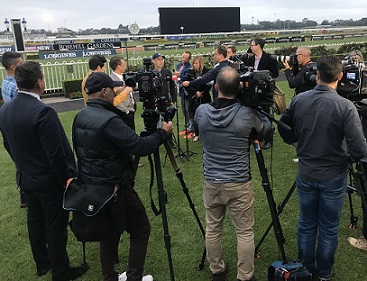 "It's less pressure because with Winx it was one horse, one team, but we had to get it right. She had to win,'' Waller said.

"If you have three horses in the race they can't all win. So I've definitely got two horses that aren't going to win, it could be three.

"Winx took things to a whole new level I've never been before and I will probably never get there again.''

A few years ago Waller realised he needed to be a more active player in a couple of areas of racing he hadn't been able to master.

One is the two-year-old scene, and while a Golden Slipper still eludes him it seems a matter of time given he's already won two Breeders' Plates, and the other concerns sprinters.

Waller has strained Group 1 winning sprinters, a horse like Delectation comes to mind, but he's been a minor player rather than a force.

Chris Waller Racing is one of the 12 slot holders but 2019 will be the first year he's trained a contender not only in his slot but in the race itself.

Two years ago CWR was represented by Deploy, trained by Gerald Ryan, while last year Victorian sprinter Brave Smash was his runner.

So to have three runners - Arcadia Queen, Nature Strip and Yes Yes Yes - a quarter of the field in Australia's richest race, the TAB Everest, is an ominous sign Waller is getting things right.

"We said a couple of years ago we need to concentrate on sprinters because this money is taking things to a new level,'' he said.

"These are the races you want to win and be recognised for winning. It's good to know we can get three runners in this race based on that goal and it's a privilege to have three horses for three different slot holders and connections.

"I'm a small shareholder of our slot, obviously there's pressure there to perform with our slot and choice of horse with Yes Yes Yes.’’

Waller said his trio have wound up their preparations for the TAB Everest to his liking. Nature Strip had his main gallop on Monday while Arcadia Queen and Yes Yes Yes strode out on the Rosehill course proper on Wednesday morning.

“In sporting terms they'll charge out of the stadium and go on to the field ready to run,’’ Waller said.

“It’s a bit like the Bathurst race last Sunday, we’re all concerned about petrol and things like that. It’s no different to a horse race, you have to conserve energy and have enough speed and maintain that speed.

“They are three very different horses. Arcadia Queen has done an amazing job in WA and she has shown Sydney she can win here. She's only a young horse being a four-year-old, she has a lot of upside and I think a lot of quality.

“How do you underestimate Yes Yes Yes, he's a three-year old colt. He's the horse that has to go to a new height in terms of age, the others have been there and done it. Nature Strip will keep them honest so it is hard to separate them and it is just good to have three horses in such a great race.’’

The nine times premier Sydney trainer played diplomat when asked to pick one of them – that’s again his norm – but Waller said each are well placed to produce their best on Saturday.

Arcadia Queen is the most favoured by the market at $5.50 with TAB and fared best when the draw was beamed onto the Sydney Harbour Bridge in three, Yes Yes Yes ($11) out in nine didn’t bother Waller while he says 12 is a good gate for Nature Strip ($23).

“He's not the best of beginners, he can he half a length slow, so that gives us the option to just gradually find his stride,’’ he said.

“If you draw one and you're half a length slow, especially in a race like the Everest, straight away someone will grab the fence and take your position.

“It will allow Tim Clark to roll across gently, I guess find the front and that way he will be in his own rhythm and run his race without being fired up.’’

Arcadia Queen hasn’t raced since her impressive Sydney debut, winning the Group 2 Theo Marks Stakes (1300m) five weeks ago and Waller has been managing her closely to ensure she can compete with the best over 1200m.

“Seeing her work this morning, she's very sharp,’’ he said.

“I've been fearful she might be looking for further that's why we've kept her fresh and spacing her runs has allowed us to do that.

“She's had a trial, she went to Randwick last Saturday for an exhibition gallop to get that nervous energy out of her, we don’t want that creeping into her game on Saturday, and hopefully we get it right.’’

Then there’s the colt, the three-year-old Yes Yes Yes who has the advantage of just 53kg but the disadvantage of giving away experience to some of the best sprinters in the world.

He says the TAB Everest would look very good on his CV as a stallion prospect so it’s well worth the punt because an Everest win illustrates you have beaten the best on the planet just as much as a Group 1 title does.

“He has the most upside of all of them,’’ Waller said.

“It gives Glen Boss the option to find a bit of cover but also get out and get going when he needs to with his light weight. Let’s hope he can win with a bit to spare and that says he’s better than normal with that weight advantage he’s got.’’