Nothing but quotes from the trainers of all runners in the $500,000 Polytrack Provincial Championships Final (1400m) at Royal Randwick on Saturday.

1. Turnberry (Kris Lees, Newcastle): “To be fair he probably wants a bit more ground so we have kept him a bit fresh. He was strong in his Wyong win, the alley won’t really worry him because he will roll forward. He’s the one who is a proven Saturday horse. I haven’t done much with him this week, just a bit of work on Tuesday morning to keep him pretty fresh.’’

2. Archedemus (Gwenda Markwell, Kembla Grange): “He’s had five weeks in between runs but he’s had a trial at Warwick Farm and galloped a half mile on the course proper on Saturday and worked outstanding. I rode beside him in the gallop and thought ‘that’s a nice horse working beside me’. You just don’t go out and win five straight, the only problem we have with him is in the barriers. He’s not as bad as he used to be but it’s in him. If we get over that part we’ll be right.’’

3. Spring Charlie (Kim Waugh, Wyong): “He didn’t have a lot of luck in his last run, he got squeezed out at the start and ended up further back than what we expected and got into an awkward position. I still thought he ran very well and his work was good on Tuesday morning so I’m very happy with him. He should be wherever (Blake Shinn) wants him to be from the barrier.’’

4. Bobbing (Bernie Kelly, Hawkesbury): “The run at Wyong really bought him on, he went into that race a half a run short. He’s done some pacework and he galloped nicely on Tuesday on the course proper. I’d rather be drawn out than in, being out there you’re less likely to get interference in theory. I’m a little concerned about them being a bit quick for him at 1400m but if the track stays soft I’d be more confident. He’ll be attacking the line regardless, we just hope we have a bit of luck.’’

5. Golden Tycoon (Greg McFarlane, Gosford): “He ran up to expectation in the Qualifier and he has to step up another level now. He can either lead or sit behind the speed and Glyn (Schofield) will have to judge the speed of the race early and make the call. He galloped on Tuesday and worked well, he’s going into this race spot on. I see the 1400m as more up his alley than 1200m but with only limited starts it still has to be proven. He has a big chance if he does run the 1400m, which I expect he will.’’

6. Safado (Kim Waugh, Wyong): “He should be just in behind them somewhere (from that barrier). He trialled last week at Newcastle and trialled fantastic. He pulled up well after it and it was a good track so he has his confidence back. He’s bouncing and very well.’’

7. Chalmers (Kris Lees, Newcastle): He didn’t quite come up last preparation but he reacted really well fresh in the heat. If he could have got going a touch earlier he could have just about won so that was quite encouraging. He’s a knockout chance, he’ll be back in the field and if it is a solid pace he will be suited.”

8. Oakfield Twilight (Damien Lane, Wyong): “He’s a horse I’ve always had a bit of an opinion of but he’s been a very slow maturer with his racing manners. I’m very surprised he’s only won one race but he is slowly starting to work it all out, each run this prep he’s got a bit better and I thought his run in the Qualifier was excellent. Josh Parr came up and rode in his trial and he trialled super, the soft draw helps and he’ll put himself there.”

9. Miss Redoble (Tracey Bartley, Wyong): “She was overlooked in the Qualifier but we’ve always thought she went pretty good. She’s spot on, she had a gallop on the course proper on Tuesday and she went through her gears and she’s ready to go. She’s as well as I can get her, she’s a lightly framed horse that doesn’t require a lot of work. Her mother was placed in an Oaks, she has a bit behind her saying she will get some ground and I think she will run a mile.’’

10. Bangkok (Allan Denham, Wyong): “She tries hard, she’s a very honest mare who has put in one bad run in her life. The first three from the Qualifier all deserve to be there because they all had bad alleys and hard runs. She should be fourth or fifth just in behind them. There are probably horses in the race with better credentials than her but it doesn’t always mean the best horse wins.’’

12. Bye See (Mick Tubman, Kembla Grange): “She’s on the way back I think, she had a virus last preparation. She was disappointing at Hawkesbury but even though she missed the kick at Kembla she powered home so she’s back on track. She’s drawn beautifully, I just hope everything goes right. I galloped her on the course proper on Tuesday and again on Thursday she went five at three-quarter and came home strong the last 300m. I’ve always thought she is good enough to win anything when she’s right.’’

13. Oakfield Missile (Damien Lane, Wyong): “I have no doubt if she had the luck she runs third at Hawkesbury. With the Newcastle heat in mind we were a touch underdone then at Newcastle she drew soft and we tried to ride her a bit close. I think she is a better horse just left alone, I think the way the race is going to be run it will suit her having the last shot at them down the outside.” 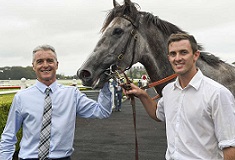 15. Eugene’s Pick (Robert & Luke Price, Kembla Grange): “She’s absolutely super but I nearly fell off my chair when I saw we drew an outside gate. It’s a monumental obstacle now but it is what it is. I think she will be better on top of the track, we had to do a bit of work from the barrier (at Kembla). The 1400m start at Randwick is a good long run and it wouldn’t be a bad thing to be three wide with cover. She had a good hitout last Saturday and Luke rode her again on Wednesday morning and she dragged him through the line. Both Luke and I couldn’t be happier with her, we just need a bit of luck.’’

16. Mandylion (Gwenda Markwell, Kembla Grange): "She is just very honest and tough and she will be very competitive. She really looks well and is working well and I'm happy to have Corey (Brown) back on her.''

17. Fuchu (Kim Waugh, Wyong): "He struck a heavy track and at Wyong with 16 runners he just got cleaned up on the turn. I couldn't be happier with how he is going, I'm excited he got a run. He's drawn terribly but he gets back anyway and hopefully he will be able to track into the race on something's back.''