With the likelihood of another rain affected track on Golden Slipper Day, Cosmic Force put his hand up as a contender with his big win in the Pago Pago Stakes at Rosehill.

Visually it looked impressive and comparing his win with the filly Kiamichi in the Magic Night Stakes a race earlier the Punter’s Intelligence data says it was as good as it looked.

Add to those figures the colt covered an extra 7.4m to the filly 3.6m.

Beyond the Golden Slipper though three fillies emerged as horses who will likely appreciate getting to the 1400m of races like the ATC Sires’ on April 6 or the Schweppervescence on March 30.

They are Crystal Falls (second), Amercement (fourth) and Probabeel (sixth).

Of the trio the one to focus in on is the Kiwi filly Probabeel. While her last 600m wasn’t the fastest of the race there are two things to point out.

She did clock the fastest last 200m of 12.17 and she covered an extra 11.7m in the run, almost three times the extra ground of Amercement and five times what Crystal Falls covered.

Don’t be writing her off when she gets to her target race of the Sires’ on Derby Day. 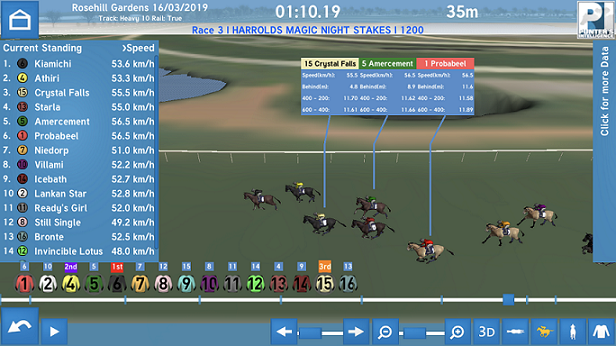 There were three 1500m race at Rosehill highlighted by the Coolmore Classic and the Group 1 fillies and mares race was comfortably the quickest of the three.

Breaking those races down, Dixie Blossoms was clearly superior in the last 200m running 11.85 with Fifty Stars on 12.04 and Verry Elleegant on 12.19.

It has to be said with the big field in the Coolmore the girls went out a lot quicker in their first 500m than the other two races.

Of the three winners Fifty Stars produced the best last 600m of 35.49 and the best part of his race was the final furlong.

Two imports were the focus of the closing race of the day, a benchmark race over 1900m and both Supernova and Desert Path can be followed with confidence.

Clearly, Supernova handled the conditions better than his European counterpart – he ran the best last 600m of 36.18 (including 11.79 and 12.13 for his final two splits).

The latter would probably prefer a track in the good to mid-range soft to produce his best on what we saw on Saturday.