The Punter’s Intelligence sectional data from Saturday’s Group 1 $4m Longines Queen Elizabeth Stakes (2000m) illustrate the flagship race of The Star Championships was as much a game of chess as a horse race.

Each of the seven combatants recorded a best of the race sectional at least once but the telling blow came when Addeybb was allowed to run the fastest last 200m of the Queen Elizabeth (11.75) after taking the lead.

Let’s go back to the start.

Unfortunately for those out the back while they were trying to edge forward the leaders were picking up the pace.

Interestingly there was only 0.37 between all seven runners looking at the last 600m splits. Sir Dragonet in fifth ran 34.39 for the race’s best while Mo’unga clocked 34.86 at the tail. 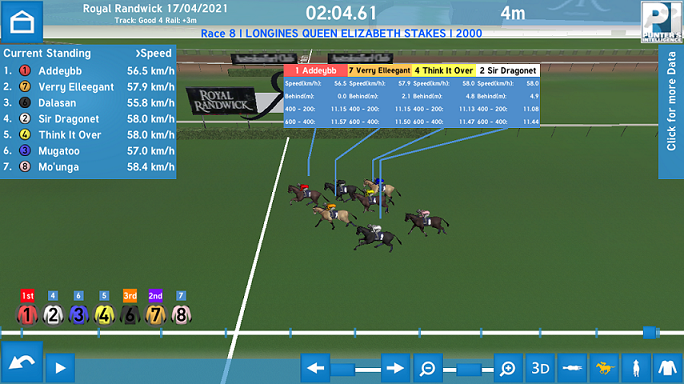 There has to be a big win in talented colt Prague one day if he can correct his barrier manners after his excellent third in the Group 2 Arrowfield Sprint (1200m).

He was a length slower than any other horse out of the gates then produced the fastest split for each 200m section to the post.

Both Isotope and Prague clocked the meeting’s fastest last 200m of 11.46. Prague is among the nominations for this Saturday's Group 1 All Aged Stakes (1400m).

It was run by the enigmatic but talented Air To Air who clocked 33.59 as she ran on from near last into sixth placing and if she can find a suitable race, and perhaps settle that bit closer, she might break through soon.

But the horse to take out of the Sapphire could well be The Hunter winner Sweet Deal who signalled she’s back on track with an eye-catching fourth placing after settling a lot further back than we’re used to seeing. She posted a last 600m of 33.64 and she was clearly fastest from the 400m-200m running 10.76.

Arnaqueur is a youngster with a future based on his slashing fourth in the Agency Real Estate Mile (1600m) in a race that wasn’t run to suit a horse coming from last despite only having six rivals.

He easily clocked the race’s fastest last 600m (34.51), almost two lengths superior to the next best.

Private Eye, runner-up in the South Pacific, proved his first-up miss was a lie running the fastest last 200m of 11.60.