Australian Oaks and Golden Eagle winner Colette announced herself as a serious contender for all the big features during the Sydney autumn and The Star Championships with a dazzling win in the Apollo Stakes (1400m) at Randwick on Saturday.

Clearly the mare revelled in the conditions and it must be remembered that, so far, she’s proven to be at her best in soft to heavy ground but Punter’s Intelligence sectional data reveals hers as the standout performance of the day.

What race is the one for her in the next coming months? Could be a Doncaster Mile (1600m), does she stretch out to a Sydney Cup, on a wet track she may be competitive in the Longines Queen Elizabeth Stakes at 2000m.

It’ll be interesting to see if she can maintain the dominance over the star mare Verry Elleegant as the distances increase but she’s taken first points. 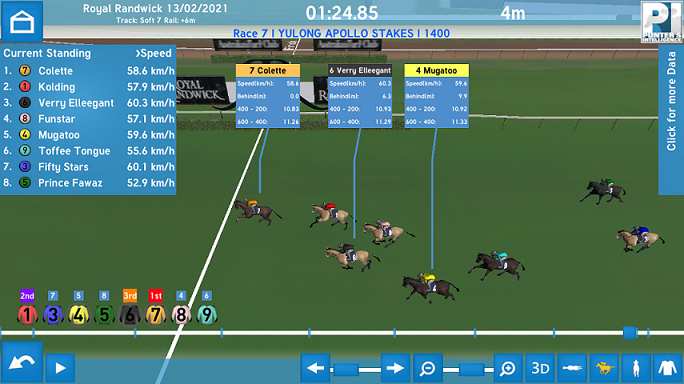 Masked Crusader finally started to deliver on all his promise with a comprehensive win in the Group 3 Southern Cross Stakes (1200m).

Behind him a couple of smart customers resuming from injury would have pleased their respective connections – third placed Victorem ran a 34.05 last 600m (he knocked up a bit late) while Gem Song, who hadn’t raced since the 2019 Golden Eagle, ran the second fastest last 600m (33.84) and last 200m (11.56) as he ran into fourth.

Every Rose’s front-running performance to win the Group 2 Light Fingers Stakes (1200m) was enormous and her effort should not be understated.

She ran her first 600m in 35.21 which was some five lengths faster than Southern Lad ran out in the Southern Cross (36.37), won by Masked Crusader, and Tailleur who won the Triscay (36.35) while her overall time was less than a length slower than Masked Crusader.

She was entitled to stop, and she did running a last 600m of 35.21 but the damage had already done. Something was entitled to run on and Never Talk was the one charging late to just miss.

Tailleur didn’t get it super easy in the Triscay Stakes in the early stages as Electric Girl matched her but she did manage a couple of cheap sectionals and they were key to her holding on.

Runner-up Tricky Gal posted a race best last 600m of 34.08 (Tailleur 34.40) but while she actually ran the fastest last 800m when the winner took off again she could only pull half a length off her per 200m.

Golden Eagle runner-up Icebath ran a 34.38 final 600m so her run was solid overall though she knocked up late with a 12.00 last 200m so would have improvement in her.

You always like to see a two-year-old back up an impressive performance and Stay Inside did just that with his easy win in the Pierro Plate (1100m).

Interestingly, King Of Sparta clocked a solid 34.79 (third best) for his last 600m but he stopped noticeably in the last 200m (12.47). He wasn’t reported to have a post race issue so perhaps he couldn’t sustain it on the wet ground.

One more to note is import Cliff’s Art who produced a race best last 600m of 34.13 in the Ranvet Handicap (1300m) to run fifth. His time was a length better than any rival so he’ll be worth watching next time around.