Preparation Key To A Hero's Welcome For Parr

When it comes to preparing for a race most people expect you to win it doesn’t matter to jockey Josh Parr that he’s riding the favourite in a Group 1 at Randwick on Saturday. 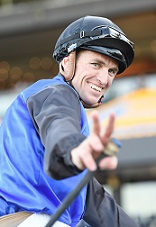 Yes he’s excited to be in the box seat to claim his sixth major on Shadow Hero in the Group 1 $1m Moet & Chandon Spring Champion Stakes (2000m) but that won’t change his build up.

Parr revealed the simple in theory but potentially difficult in practice method he has learned to handle the pressure of those big race moments.

“I like to prepare, and I was taught this a few years ago, for each ride exactly the same,’’ Parr said.

“Whether it is a maiden at Gosford or a Group 1 at Randwick, whatever it may be.

“You tick all your boxes with your routine leading into the race and that helps with dealing with pressure and sometimes nerves.

“It works because you know you’ve done everything possible to give yourself the chance to win.

“It’s an absolute beauty and I give the same advice to any young rider. Preparation is key and the same preparation is very vital.’’

The 32-year-old claimed his first Group 1 win back in 2010 on Skilled and his second came in the 2014 Spring Champion Stakes on Hampton Court.

In the past 18 months he’s added three more Group 1s to his tally and it’s been that advice from his sports psychologist that Parr credits for his consistency at the top level.

When it comes to Shadow Hero, the expectation aside, Parr said he has every reason to think the gelding will justify his standing as the horse to beat.

“I’m very confident in the horse, as many people are, and his preparation has been faultless to this point which I think is a big positive,’’ he said.

“He’s very promising as a staying three-year-old prospect and hopefully into his four-year-old year.

“At the moment he ticks every box for a three-year-old stayer. He’s a calm horse, you can’t unsettle him at all, he has an efficient action and a long stride and to top it off his breathing is remarkable.

“He pulled up in very good order after his gallop on Tuesday morning and it was a solid hitout to have him ready for 2000m on Saturday.’’

Punter’s Intelligence sectional data illustrates that dominance and turn of foot where his last 600m of 35.65 was 2-1/2 lengths faster than anything else in the race and he put the result beyond doubt sprinting 11.57 between the 400m-200m where he turned a 13m head start into a 3-1/4 length win.

There’s just one question mark hanging over the gelding and Parr says we won’t know the answer until they hit the line – how will Shadow Hero handle the rain affected ground which is forecast for Saturday?

“We haven’t tried him on it so it is an unknown and often that can be a little bit daunting. But in general a fit horse will often get through wet ground and he is a very fit horse.’’

Shadow Hero was $1.70 favourite with TAB on Thursday and his main danger, Champagne Stakes winner Castelvecchio, is a horse Parr knows plenty about and is therefore wary of.

Parr has ridden Castelvecchio, a last start seventh in the Golden Rose (1400m), in all but one of his seven starts but decided to stay with Shadow Hero following that impressive Gloaming Stakes win.

Shadow Hero wins the Gloaming Stakes at Rosehill on September 28

“I made a statement before the Golden Rose about his trackwork, I was bullish about his work and he disappointed me in the race and I was left with egg on my face,’’ he said.

“We’ve always thought he will come into his own when he gets to this sort of distance so he is a deserved second favourite and one I’m cautious of.’’

Comments from Josh Parr on some of his other Randwick rides:

Quackerjack (Cerrone Hcp, $5): “He’s in really good form, he’s grown into a nice horse now. He has muscle on muscle and he’s starting to work with us a lot better than he did as a younger horse. His trials were great and his work since has been really good, first-up at 1400m is a positive and you can look for him to be stronger second and third-up.’’

Bottega (Stan Fox, $2.40): “He’s won in really good style both times against opposition that were no match for him. He has a lot of ability, we’ve liked this horse for some time now and we weren’t at all surprised by him winning in great fashion both times. He still has a way to go with experience and racing knowledge but I am confident he is learning quickly. We could get a solidly run race and if we do he will take a hell of a lot of beating.’’

Standout (Roman Consul, $8.00): “This is the first time I get aboard this horse, he’s been very impressive and Gerald Ryan speaks highly of him. He was very good last start and I think he is going to be in the mix, it’s a red hot field though isn’t it.’’