Peters Knew Instantly Waller Was Fit For His Everest Queen

Bob Peters saw a little of himself in Chris Waller and that’s the simple reason he chose Sydney’s champion trainer to prepare his star mare Arcadia Queen for the TAB Everest. 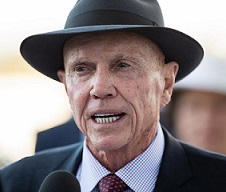 Perth’s biggest owner-breeder usually sends his best horses to Melbourne if he thinks they have outgrown racing in the West but with the four-year-old eligible for two races worth a combined $21.5 million it had to be Sydney in the spring.

It took one meeting with Waller in April for Peters to be won over and success in either Saturday’s $14m TAB Everest (1200m) at Royal Randwick or the $7.5m The Golden Eagle (1500m) at Rosehill on November 2 could cement the cerise and white in Sydney for some time.

“I thought he must know what he’s doing, I was impressed with the way he runs the stable with big numbers and quite effortlessly it seems,’’ Peters said.

“When the Easter sales were on I went out there for a meeting with him and I thought it’d be 30 minutes but it turned out half a day.

“He showed me all his systems and it was quite impressive.

“He runs his business much the same as I used to run mine, you get a good team of people headed by a good person and you rely on them to be feeding you the information. That’s what he does.

“Chris has a couple of ours at the moment and we’ll see what happens.’’

Most people in racing would know Bob Peters as the most prominent figure in Perth thoroughbred industry but he worked his way there through becoming a leviathan in the motor vehicle industry and a multi-millionaire by the age of 30.

He won his first races in 1973 and since then he’s been on just about every committee and board involved in Western Australian racing. He was inducted into the WA Racing Hall Of Fame earlier this year.

Peters and his wife Sandra have raced horses in Sydney before though most of their interstate success has come in Victoria and South Australia.

His breed shaping stallion Old Spice contested the Epsom Handicap in 1984, Old Spice’s best son Old Comrade ran seventh in the 2002 Doncaster behind Sunline and he part-owned a mare called Jolie’s Pearl who had five starts in NSW before being retired.

But after that dominant win in the Group 1 Kingston Town Classic (1800m) in December, Arcadia Queen holds the mantle of the best horse Peters has sent east.

He also sent last year’s Winterbottom Stakes runner-up Enticing Star to Waller and not long after Arcadia Queen was secured by The Star to run in the TAB Everest the Chris Waller Racing syndicate handed Enticing Star a start as well.

While Arcadia Queen lived up to her reputation with dominant Group 2 Theo Marks Stakes (1300m) win at her Sydney debut last month, Enticing Star was retired when she failed to fire in the Golden Pendant and was replaced in the Waller slot by Yes Yes Yes.

Those are the ups and downs of racing that Peters, at 77, knows all too well.

That’s why he is something of a stoic figure on race day – though it will be interesting to watch him should Arcadia Queen be looming at the business end of the richest race on turf.

“When you race a lot of horses like we do, a lot of people say do you get excited but really you get relieved when it is over. With a race like this, I don’t go in with great expectations because the competition is so good.

“If she performs well it will be exciting, if she’s out the back it won’t.’’

In Perth, when it comes to his horses Peters does the talking.

He doesn’t mind it, it takes the pressure off his trainers in WA and you’d struggle to find a form analyst or expert who knows his horses better.

He’s a hard marker and on face value, quite surprisingly, Peters thought Arcadia Queen’s Theo Marks victory was just a nice win though Punter’s Intelligence data showed she sprinted best from the 600m-400m in 10.91 and ran 33.33 for her last 600m, just 0.14 shy of the best of the race.

“When I analysed the sectionals afterwards it started to make me get a bit excited,’’ Peters said.

“There’s one concern that everybody is trying to keep the speed in her and are worried about the distance because she has won at 1800m.

Arcadia Queen deposed Santa Ana Lane as favourite for the $14m TAB Everest on Wednesday night then by morning was back to $4.40 second elect.

Peters was happy the mare, who will officially turn four on TAB Everest day, drew well at Tuesday night’s barrier draw though does have some concern about barrier three given where a lot of the speed will come from. 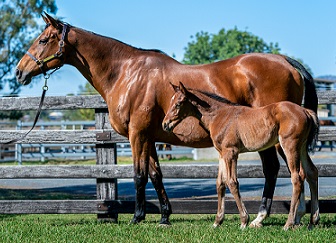 “There’ll be a lot of speed on I would think and those horses, the way they race, they have to come across, I’d be a little worried we get shuffled out the back if we don’t begin well,’’ he said.

“That’s all I’ll be talking to (James McDonald) about is to make sure she jumps.’’

But what does it mean to him to have a live chance in the TAB Everest? In typical style he deflects a little though it clearly does mean a great deal.

“It means a lot to everyone concerned, up at Holbrook (at Scone) they were doing a group photo with all the staff with Arcadia Queen’s full sister who foaled this month,’’ he said.

That little two-week old Pierro filly, out of Peters’ mare Arcadia, is already worth a bundle so imagine what she’s worth if she becomes the first full-sister to a TAB Everest winner this weekend.