'No Frills Racing' - Inside The New Normal For Jockeys

Kerrin McEvoy calls it ‘no frills racing’ - no crowds, no owners, no media, no contact, no atmosphere.

Kerrin McEvoy says he's proud of how the racing industry has responded to the coronavirus crisis. (Pic: Bradley Photos).

But McEvoy, who aside from being a champion rider is also president of the NSW Jockeys Association, says his colleagues across the state quickly realised what was at stake, urged on by an early scare, and turned their lives upside down to keep racing on the track and not on the sidelines like other sports during the COVID-19 crisis.

It’s been over eight weeks – from March 16 to be exact – since jockeys became protected like an endangered species so horse racing could continue and it’s required a huge shift in behaviour both on and off the track.

“It’s taken a bit of getting used to and adapting to but at the same time everyone has embraced it and realise we need to keep the show going,’’ McEvoy said.

“We’re still thinking along those lines, we are lucky to be still working. It’s a credit to everyone involved.’’

On March 23, a week after the introduction of strict race day protocols, NSW was split into three zones and jockeys were required to nominate which area (metropolitan, north or south west) they would ride in.

Jockeys are only allowed to ride at meetings within their specified area, they can ride trackwork once a week and can participate in selected barrier trials and the rest of their week is dedicated to ensuring they don’t come into contact with the virus.

No jockeys, no racing. And the reality of that scenario hit home early in the crisis when Victorian rider Mark Zahra discovered he had been potentially exposed to the virus on a flight from Sydney to Melbourne.

The news came only a few days after the Golden Slipper meeting, the first major meeting run in NSW behind closed doors, and caused racing in three states to be shut down pending Zahra's test results, along with tests taken by Hugh Bowman and Tommy Berry who had subsequently shared a charter flight with Zahra, which ultimately came back negative.

McEvoy said at that stage the jockeys were already shaken by the cancellation of the AFL and NRL seasons and feared racing could soon follow.

“That scared everyone. When the footy codes went, we were waiting hour by hour for the bad news,’’ he said.

“I just thought ‘we’re doomed here’. It was worrying.

“When Mark had his test that was the first rumblings of what could have been. We were all waiting on tenterhooks to see the result.

“You hated to think what the implications were if there was no racing so it has been a blessing.” 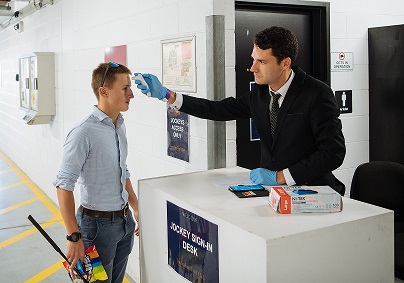 Jockey Tom Marquand has his temperature taken on arriving at the races. (Pic: Paul McMillan).

It seemed once The Championships arrived in April, while the wider community was forced to shut down, the Australian racing industry really hit its stride and has gone on largely unaffected, aside from the Tasmanian closure.

What was an inconvenience, or an adjustment that needed to be made, early on became the new normal practice and McEvoy said he, and it appears all riders, has found the right rhythm.

Like everyone else, the jockeys have become used to washing their hands regularly, keeping their distance and staying home when not at work.

“You could tell in the first few weeks the protocols were there everyone was feeling their way,’’ he said.

“By a week or so in you’d see the barrier guys with masks on, then we went from having a few media to no media, putting sanitiser on between races.

“It was hitting home the further we got into the restrictions.

“It took some adjusting in that regard but we realised we needed to keep the sails up and the show rolling. It’s been a remarkable job from everyone involved.”

When a jockey arrives on course they have their temperature checked, if it happens to be slightly elevated they are given a second test 15 minutes later. If they pass they ride, if they fail they go home.

They also have to shower on entering their jockeys room and are required to disinfect all gear between races. No chances are taken.

A number of jockeys rooms have been established on each racecourse to allow adequate separation, or social distancing, and while the groups can change a little depending on who is riding McEvoy said there’s been one interesting pairing.

“Hugh and Tommy are in same room so they’ve become best buddies of late. They haven’t asked to be changed,'' he said.

“I can only speak for myself but it was an easy adjustment for me. 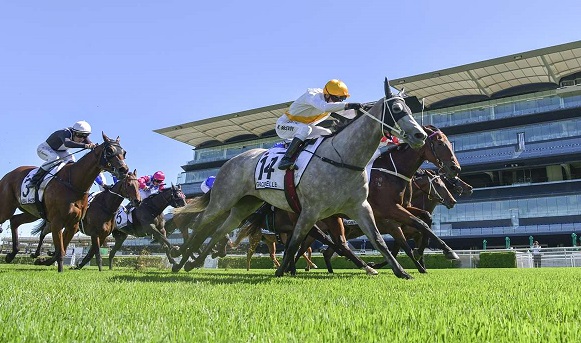 Racing has continued without crowds since mid-March. (Pic: Bradley Photos)

"Less jockeys in the room isn’t an issue for me, I like to focus on the day’s play, and being a senior I was lucky enough to be one of those left in the main room.

“We give each other plenty of room and space then it’s get ready like you normally would. It’s a bit quieter in the room, there’s not the noise and ruckus nature of a room filled with 20 or 25 different riders.

“It’s made it a no frills approach to your working day. You’re able to concentrate on getting on the horse and doing your job.”

That’s a good chunk of what punters and viewers don’t get to see as racing continues seven days a week.

What we do see is the competition on the track and, while there are no crowds to roar and post-race celebrations are subdued, McEvoy said on that score it’s business as usual.

“It was weird on the big days not to have owners or the crowd there,’’ he said.

“I’ve been asked a few times by trainers and people outside the racing industry what it’s like to race with no-one there. They wonder how we get the adrenaline going.

“Once you’re on the back of the horse it’s actually no different.

"We were going out there for Doncasters and Derbys and Slippers and I’m sure everyone’s heart rate was still at the notch it should have been at.

“The aftermath was a bit quieter but the adrenaline was still there from a jockey’s point of view. I’m sure the jockeys in the other areas would be going into their races with the same approach.”