Late on a Sunday afternoon you’ll often find Nigil Mohanan walking through trainer Gwenda Markwell’s stables, spending as much time with the horses as he can.

Or watching race replays, with a drink in hand, sometimes with a horse peering over his shoulder to review their performance together.

What you wouldn’t know about this 29-year-old is he has a Masters degree in Mechanical Engineering and turned his back on a career in that field when he discovered a passion for horse power of a very different kind.

That passion has reached a stage where Markwell, leading trainer at Kembla Grange for many years, is passing on her knowledge so the young man from Kerala in south west India can one day become a trainer himself. 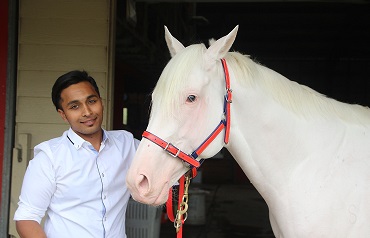 Mohanan’s unlikely path from being part of his father’s transport business in India to wanting to train racehorses in Australia took a turn about five years ago when he sought a part time job at Markwell’s stable simply because he likes animals.

“It was hard for me when I started here because I love animals but I just started for pocket money and I’d never touched a horse,’’ he said.

“I did a Bachelor in Mechanical Engineering in India then I worked in Thailand for eight months.

“I thought I’d do Mining Engineering at the University of Wollongong but I finished one year I thought I couldn’t do mining any more so had to change back to mechanical.

“Everyone said it was easy to get a job when you went abroad. If you could do higher education you would be well paid and there were plenty of jobs.

“It’s hard to run a business in India because of union strikes and everything. It’s too much of a headache so I thought I’d come to Australia, complete my studies and try to get a job and settle here.’’

When he started working for Markwell it was about 16 hours a week doing basic stablehand work, grooming, mucking out boxes, washing and walking horses.

He must have made an impression on the trainer because once Mohanan finished his degree she offered him a full time job.

It wasn’t the job his parents were expecting him to snare upon completion of that Masters in Mechanical Engineering and it’s safe to say his father didn’t approve.

“I wouldn’t be dealing with horses at home, I had never thought I would want to be a horse trainer when I came here,’’ he said.

“When I said to my parents I was working (at Gwenda’s) they asked me why I wasn’t getting a job. I said ‘this is a job’. Once I started getting interested in horses I didn’t feel like going back to mechanical engineering.

“It’s hard for them to understand because in India people think in a different way. My parents think working with the horses isn’t a good job. But I told them there’s millions of dollars coming into racing, it’s a big industry.

“I didn’t pick up their calls for three or four months. Then they started calling Gwenda.

“I told them this is my interest now and I had to work on it. Even now they aren’t that happy but they have no choice.’’

It’s not easy to gain Gwenda Markwell’s trust but Mohanan has become something of a right hand man over the past couple of years. He knows he’s lucky to be taught by someone so accomplished.

Markwell says when it comes to horses you don’t learn by studying, you learn by doing so Mohanan is learning how to train racehorses hands on. That includes riding them.

“One day I told Gwenda I wanted to be a trainer and she said she would give me a hand and help me out with everything,’’ he said.

“But she said I need to know, in case I am ever doing it alone, how to ride. You might get riders but if there’s no rider you can’t just let them sit in the box and do nothing. 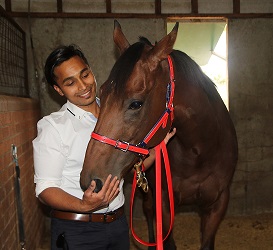 Nigil Mohanan, with Archedemus, has a Masters in Engineering but is doing his 'apprenticeship' in racing with Gwenda Markwell. (Pic: Grant Guy).

The horse given the honour of being Mohanan’s first riding experience was a gelding called Hadaaf, owned by Frank Cook, who is now a lead pony and lives in the paddock adjoining the Markwell stable.

“The first time it was so scary I was thinking of jumping off. I didn’t know how to stop,’’ he said.

“I was looking both sides for which way I should jump off but the first thing Gwenda said was never jump from a horse.’’

That baptism of fire seems a long time ago as he now rides 10 to 12 horses a day, thanks in part also to pointers from jockeys Keagan Latham and Scott Pollard over the past few years.

Markwell threw Mohanan in the deep end again when he spent three months with Helen Page in the late autumn of 2018, charged with the responsibility of preparing Pomelo in a four-start campaign following the Provincial Championships.

The trust earned now extends to dealing with owners, working on racing programs and nominations, race day commitments and on occasion liaising with local media. It’s all been part of the learning process.

“I started looking into the fields and form, jockeys and everything,’’ he said.

“We’d sit at the coffee table to discuss what we tell the owners about the horses’ progress and once I started interacting with the owners Gwenda left me with a few owners to deal with.

“I’m still learning but it makes me feel really good when everything works. You don’t stop learning in this industry.’’

The day will come when Mohanan’s ‘apprenticeship’ is complete, when he needs to move on to gain more experience or when it’s time to go it alone, but he says he’s in no rush.

Nigil would say he couldn’t be in a happier place.

“I’ll sit here in the evening and have a beer, it’s quiet at night and I go for a walk sometimes,’’ he said.

“It never feels like you’re alone, it’s a good feeling to talk to the horses and stand with them. I really love it.’’