A slot in the 2020 TAB Everest will be thrown open to the public to buy into with MiRunners snapping up a place in Australia’s richest race.

MiRunners CEO Steve Brown said the micro ownership group’s decision to purchase the GPI Racing slot will make owning a piece of the biggest prize in racing affordable for the average punter.

“We were established because we wanted to make the top end of sport available to everyone rather than it just being the Sport Of Kings,’’ Brown said.

“It enables people who love racing, or people who have never been in racing or can’t afford to, to play against the big guys. That evolved into the opportunity with The Everest to do in principle the same thing. 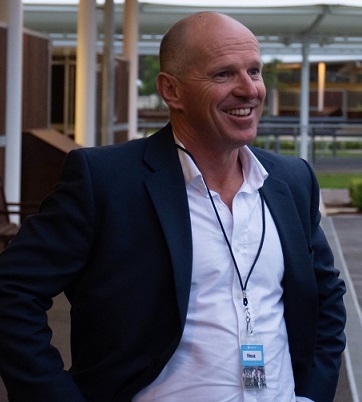 Steve Brown, CEO of MiRunners which is making owning a piece of the TAB Everest affordable.

“I am particularly grateful to Greg and Barb Ingham of GPI Racing and Bruce Slade of Kestrel Thoroughbreds who negotiated the deal.

“They were courted with higher offers throughout the slot negotiation process, but demonstrated exemplary integrity by standing firm and held a strong belief in what we aim to achieve.

“We think it can be a massive moment for people and one of those once in a lifetime opportunities. To be competing in the richest race on the planet is pretty bloody exciting.”

The concept works as follows.

Known as MiEverest, the slot was purchased for $880,000 (including GST) and has been broken down into 1000 units that can be acquired by any person or group for $880.

Each unit holder will be entitled to their pro rata share of prizemoney won – first prizemoney in 2019 was just over $6 million – and Brown said MiRunners will not take any mark up or share of the prize money.

When it comes to selecting which horse will run in the TAB Everest slot on October 17 a panel has been assembled including form expert Daniel O’Sullivan, former champion jockey Tye Angland who ran second on Trapeze Artist in the 2018 Everest, Sky Racing presenter Lizzie Jelfs and former cricketer and racehorse owner Mark Waugh.

The unit holders will also be given a say via a voting process.

“The Everest has been a revelation for the industry in terms of the level of excitement and engagement it brings to the sport,” Brown said.

“However, slots are currently owned by either large corporations or wealthy individuals. By offering anyone the ability to participate, MiEverest blows any elitist paradigm associated with the race wide open.

“In this COVID world we really want to encourage groups to form up, position themselves for a bonding experience beyond anything they have done together before and buy their slot as a team.

“It’s a unique opportunity for social clubs, offices, sports teams, old school friends and groups of 10 mates to get together for their slice of the action - their piece of the Everest.”

It’s still five months until the $15 million TAB Everest is run at Royal Randwick and in the coming months it will become clearer as to where the COVID-19 restrictions stand.

Brown is more than hopeful that unit holders will have the opportunity to be on course, with race day hospitality options currently being discussed with the Australian Turf Club and Racing NSW.

“It’s a big opportunity on its own but if you can add the attendance to it with your mates it’s the experience of a lifetime,’’ he said.

Pre-registration for slot units has opened via mieverest.com.au.