Plenty has changed in Tom Marquand’s life since he last graced the Sydney turf but the one thing that remains as he starts his latest stint at Randwick on Saturday is his desire to win as many races as possible. 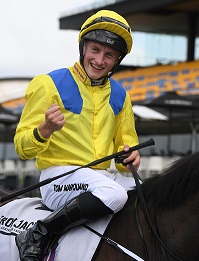 Tom Marquand is back riding in Sydney on Saturday. (Pic: Steve Hart).

He’s now engaged to fellow jockey and UK superstar Hollie Doyle, added another two Group 1s to his tally and in the space of just over six months from June 1 chalked up a remarkable 147 winners.

Marquand used his two weeks of hotel quarantine, which he completed on Tuesday, to his advantage and thrived, emerging a man on a mission for his seven week stay.

“If anything it gave me extra drive, having to do that and not just going through my normal life,’’ Marquand said.

“I knew what I wanted to do when I was in there and walked out the right way with the right fitness.

“It was a pretty mad year in the end, stats wise my best ever by a long way especially taking into consideration how short the season was at home.”

‘Aussie Tom’ is how Marquand is affectionately known.

That’s come from endearing himself to punters and participants alike over the past couple of years since he took a chance on linking up with John O’Shea sight unseen and with just a recommendation from O’Shea’s ex-foreman Tom Ward.

Through his hard worth ethic he’s reached a point where he can land in Sydney and command eight mounts including two Group 1 rides – on La Mexicana in the $500,000 Cellarbrations Surround Stakes (1400m) and Prince Fawaz in the $600,000 TAB Chipping Norton Stakes (1600m).

“It’s a massive book of rides. I’m feeling like I have to do extra well this time to make it feel worthwhile sitting in a hotel room for two weeks,’’ he said.

“And I’ll have to do a few days (quarantine) when I get back as well.

“I’ve got plenty of people to thank for getting me here in the first place.

“It was the safe option for me to go to back to Melbourne with David Hayes and Tom Dabernig but John was adamant I should come here.

“It seems insane to think that’s the reason I had my first two Group 1 winners. If I hadn’t have come to Sydney in the first place I wouldn’t have been in line to get the ride.

So how did the 22-year-old put in the two weeks of being locked in a hotel room with no open window?

He rode 450 miles in 12 days on an exercise bike, putting us all to shame, had plenty of time to phone home and did a bunch of other activities any of us would probably do in that situation but he did it with a smile on his face because someone like Marquand doesn’t get a lot of ‘me-time’.

“Obviously I’d rather be riding but as much as the idea sounds horrific, I was dreading it before going in, I ended up enjoying it,’’ he said.

“After a few days I settled into a rhythm. I could to talk to family and Hollie back home in the morning and the evening and spent the middle of the day riding the bike, reading a book, watching Netflix, playing a playstation and having time to breathe.

“In reality, since leaving school at 16 I’ve been flat out ever since.

“My weight is pretty good, I didn’t walk out any heavier than I went in which was what I hoped."

Breaking my PB scraping in just under 2 hours for 50 miles 😝🤢 pic.twitter.com/oIuijVx5Mu

A large part of the reason Marquand is back in Sydney for a seven week stint, ending on Day 2 of The Star Championships, while the pandemic is making international travel difficult is Addeybb.

He’s the horse that handed Marquand his first two Group 1 victories in last year’s Ranvet Stakes and Longines Queen Elizabeth Stakes and he wants to repeat the dose having partnered the superstar to a stunning Group 1 Champion Stakes win at Ascot in October.

The William Haggas-trained Addeybb is due to arrive at Canterbury Quarantine Centre on Monday along with stablemate Favorite Moon.

“He’s got the reputation of a world class Group 1 horse now,’’ Marquand said.

“He came here as a horse that couldn’t win a Group 1 last year and took out two major Group 1s in Australia and went home and won one of the key Group 1s in the English season.”

While his and Addeybb’s profile have risen since they left our shores last year the jockey takes nothing for granted.

“A lot of people underestimate how much went into getting him here last year, and to have him in the shape to win two Group 1s is ridiculous,’’ he said.

“They made it look easy but it’s not as straightforward as people are led to believe. Everyone’s saying all you have to do is turn up in the same form and he’ll win those two Group 1s.

“Try travelling a horse half way across the world, the stars have to align. It’s a big tough process.”