They say the harder you work the luckier you get and that’s pretty much the story of UK jockey Tom Marquand’s rise from ‘a name nobody knew’ to a jockey so in demand he’s spent more time in Sydney than at home so far in 2020.

And it’s the unlikely setting of Sydney, at Rosehill specifically, the popular 21-year-old could snare that Group 1 breakthrough that most UK experts believe is in his very near future. 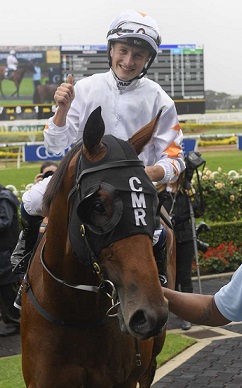 And while he admits the $3.5m Longines Golden Slipper (1200m), where he rides in-form colt Prague, doesn’t quite resonate back home Marquand is well aware of its status in Australia and what it means to any jockey lucky enough to win it.

“It's been a quick transition from being a name nobody knew,’’ Marquand said.

“I came over last year based with John O'Shea but it's been through riding that has got me to this point which is the most satisfying way of doing it.

“I thought coming here was a good opportunity to do something different, change it up for the (UK) winter, but to have a couple of chances in Australian Group 1s wasn't what I was thinking.’’

Marquand says in the UK they focus on the three-year-old classics – your Guineas, Derby and St Leger races – so, while its standing as the world’s richest two-year-old race is noted, an event like the Golden Slipper is a bit foreign.

“It's been the same pattern for a very long time. Success is judged by three-year-olds,’’ he said.

“The Golden Slipper is a race everyone in Australia looks at, so to me I regard it as the way Australians regard it as one of the most important races of the year.’’

When Marquand partnered the Ciaron Maher and David Eustace youngsters Prague and Away Game to Group 3 wins at Randwick back on February 1 he was just rapt to have landed a stakes race double.

He was due to fly back to England a couple of weeks later, at the end of his planned six week visit, and says he was ‘a bit dismissive’ of the thought of returning for the Golden Slipper and The Star Championships.

But a few things changed and, considering the impact of the coronavirus on the world, it was a stroke of luck that he decided to commit to another stint and landed back in Sydney late last week.

“It became more of a reality when I spoke to Ciaron about the Slipper and the offer was put down that I could return,’’ he said.

“I organised to come back for a week then William Haggas put his two horses in so it's become a month. I’ve been lucky the way it's developed in my favour.’’

Prague had a blip in his form when Marquand left Australia, finishing sixth in the Skyline Stakes behind debutant Mamaragan, but with the hoop back in town he bounced back last weekend to take out the Group 3 Pago Pago Stakes (1200m) over the Slipper course.

There he proved his strength by sitting on the speed and producing the fastest last 200m of the race (12.46, Punter's Intelligence) in trying conditions.

The colt, one of four Slipper runners for the Maher/Eustace stable, would be the fourth Pago Pago winner, and first since Stratum in 2005, to complete the Slipper double if successful.

Marquand is confident he can do it on the seven day back up given he’s drawn to be ridden in a similar fashion to how he’s won his races, he’s tough and has proven himself on all conditions

“The other day on that ground he went away in the same fashion as he did on good ground, to me that shows the class is there to do it on both surfaces,’’ he said.

“Because he's not fully matured, by forcing his hand and making him be in that on pace position rather than let him coast around it does help him.

“It's anyone's guess how well he will come through the week but he has shown the right signs that he will handle it.’’

Prague is a $15 chance with TAB in the Slipper but Marquand’s Ranvet mount Addeybb has all eyes on him as the $2.40 favourite in his Group 1.

Marquand hasn’t ridden Addeybb in a race, he has partnered stablemate and Manion Cup runner Young Rascal to victory, but said he’d back the six-year-old’s European form to stand up.

Of course Addeybb has beaten the well travelled mare Magic Wand - funnily enough that's a name Marquand has been referred to in some circles - and at his last start bumped into the high class Magical who has been competitive with some of the world’s best such as Enable and Crystal Ocean.

“It's a very tough race, we'd love more rain but he clearly has the class. It’d be great to win one for William, we’ve grown a good association since the back end of last year.’’

The major aim for Addeybb is the Group 1 $4m Longines Queen Elizabeth Stakes (2000m) at Royal Randwick on April 11.