If Lizzie Jelfs had her time over, there’s every chance we’d still be seeing her in the mounting yard, but as a jockey.

Instead, Jelfs is now an integral part of Sky Thoroughbred Central’s coverage and is a highly regarded mounting yard expert.

“I desperately wanted to be a jockey but because I’m not from a racing family I wasn’t encouraged to pursue it,” Jelfs recalled.

“I was also told ‘it’s not a good job for a girl’, ‘there aren’t many female jockeys’, which is amazing when you think of it now.

“I feel like that’s the one thing I really missed out on was not riding in races and I’ll probably never train horses in my own name, but I’ve come to terms with that. 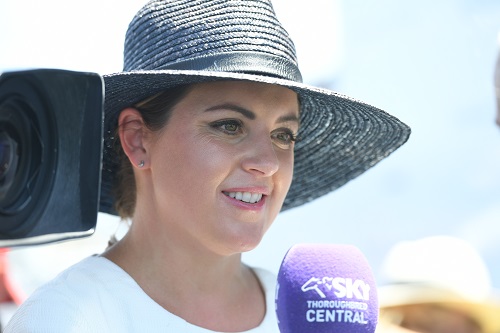 “I know riding is not an easy life and I don’t know if I would have pushed for it in England, but I would have in Australia because of the opportunities over here for female riders.”

Jelfs was born in Oxford, England, and has loved horses ever since she was a child. She remembers as a five-year-old, a riding instructor letting her off the lead for the first time in a jumping show.

“I gave the horse one kick in the tummy and it shot around this show jumping circuit. That was it. I was hooked on for life,” said Jelfs.

That need for speed saw Jelfs gravitate to racing.

“Racing was somewhere I could get my riding fix and I just loved going fast. I got the same feeling when I worked my first racehorse as I did from that first ride in the show jumping competition. I’m still chasing that feeling now,” she laughed.

Jelfs was riding work for boutique jumps trainer Charlie Edgerton, or ‘Edgy’ as Jelfs affectionately calls him, through high school and it was Edgerton’s friendship with Colin Hayes that saw her at Lindsay Park in South Australia.

That was in 2001 with Jelfs originally planning to spend a year abroad before returning home.

“I cried for the first three months of being in Australia and didn’t really like it, I wanted to go back to England but my mum kept saying once you commit to doing something for twelve months you’ve got to see it through,” said Jelfs.

It was Jelfs first time away from home, her family and her friends.

She found her feet though which in time led to senior roles as the stable’s travelling foreperson and managing Lindsay Park’s Randwick satellite stable. This saw her live out of a suitcase for the best part of 10 months of the year.

Jelfs’s passport got a working over in that period travelling to Japan and Hong Kong with Fields Of Omagh, Dubai and Singapore with Eagle Falls and to Royal Ascot with Niconoero and Nicconi.

Nicconi also won a Galaxy under Jelfs’s care at Randwick while De Beers won a Rosehill Guineas and Tawqeet a Metropolitan.

Then there was brilliant filly Miss Finland winning the 2006 Golden Slipper.

When Lindsay Park opted to consolidate their operation in Adelaide and cut back the Sydney stable, Jelfs was at a crossroads.

She was pregnant with her first child, Isabella, 7, to husband Ryan Roberts, who she met in Sydney as he was saddling up for Chris Waller while she was doing the same for Hayes.

Jelfs went back to Melbourne for two years but then along came her second daughter, Zara, 4, which prompted the move back to Sydney for the family support from Ryan’s parents.

Jelfs had no intention of going into media. It was Hayes that put her name forward for a television role and as Jelfs put it, “Two weeks later I was on camera and the rest is history.”

“I never even gave it one thought. I was so green to broadcasting, I used to just turn the television on and watch the races.

“I never used to look at how people presented, I’d just be looking at the horses the whole time,” said Jelfs.

“The one thing I want to cater for in my role now is for several different groups.

“If a punter wants to back a horse I want to provide information that is going make it an educated bet, but I also want to appeal to an audience that isn’t necessarily having a bet but wants to know about the horse.

“I want to encourage people to embrace the sport because of the animal.”

It’s that deep love for the animal that inadvertently gave Jelfs an incredible apprenticeship in understanding the behaviours and anatomies of horses.

“When I look back on it, it’s such a natural job for me because it’s what I have been doing my whole life. I didn’t have to learn anything, I had been doing the job forever,” she said, before offering a glimpse into what she is on the lookout for in the parade ring.

“General health is the main aspect. That means a glowing coat, a great walk that is loose and shows they have no problems, and a calm temperament.

“You are looking for an athlete. You can be forgiving of sprinters if they are a bit buzzed up or underdone but a stayer you want them really calm and very forward in condition.”

I can say she is my favourite right?
She is a legend, White Moss & never lets me down.
Well done to @jason1coyle @Kathy_ohara @Tartan_Fields
🐎⭐️ pic.twitter.com/1XuLZNJaaI

Jelfs now takes an active role in ensuring younger generations have a pathway into racing.

“I just want to make sure racing is still around for my children and their children, so one of my biggest drivers is wanting to tell people about the stories behind racing and the welfare of horses,” she beamed.

“I see a few young girls at the races with their note pads looking at horses in the yard, which brings a huge smile to my face. I love that.

“There was a little girl that approached me recently at the races from a non-racing family and called out ‘Lizzie, Lizzie’. She was three and told me she watched me on television.

“She told me her favourite horse was a grey and I walked away hoping that I’m inspiring one or two women to get involved.

“I loved horses, wasn’t connected to the sport through my family but had the passion, followed it, and it has been good to me.”